The length of the road is 50 km (5 hours), from Markakol Lake to Burkhat pass. Quality - gravel mountain road, difficult to traverse.

"Austrian road" is famous for its beauty.

Within the Katon-Karagaisky State National Nature Park, the road is accessible only from the southern border (Kara-Koba River) to the valley of the Bukhtarma River, which is about 60 km. However it is one of the most impressive parts of the route, which passes over 16 bridges and fords.

Its name - Austrian - which is informal, the road receiving this moniker owing to the fact that it was built in the period from 1914 to 1916 by Austrian (Czech) prisoners of the First World (Imperialistic) war.

This road can be considered as a memorial to the heroic labor of the men who at that time managed to create this monument with the help of only simple tools: shovels and picks. 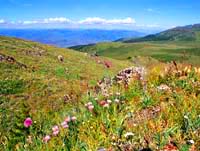 Today, the Austrian road is valuable from a historical point of view as well as being a peculiar natural monument, which comprises unique features such as Marble pass, Marcacol Lake, Altai and Burkhat passes, the valley of the Kara-Koby River, etc. And in connection with the Northern Branch of the Silk Road, passing through the valley of Bukhtarma river, the Austrian road is a unique natural historical object.

From Urunkhanka, we move northwards to the Tarbagatai mountain range through taiga and alpine meadows, crossing over high and low lands. We descend to the valley of the rapid mountain river, Kara-Kaby. The path leads up through a picturesque ravine, crossing the river several times on small bridges.

We are driving through the territory of Katon-Karagaisky State National Nature Park. It is the largest national park in Kazakhstan and the Altai-Sayansky eco-region.

Its territory is in a region which is rich in forest resources. These forests have been little changed by economic activity and have lost little to forest fires. It is one of few places on Earth where mountain cedar (Cembra pine) forests grow.

The park territory is the only place in the Republic where certain species of plants grow. Only in this area and in the nearest surroundings, Vereschagin, Ludwig iris, and small-fruit cranberry grow. In light of this, the park plays a leading role in the preservation of these species' gene pools. 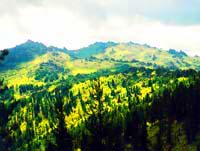 The transition of the desert and semi-desert zonal landscapes of the Zaisan hollow into mountain ranges with well-marked alpine belt makes for the existence of fauna and flora, various in origin and rich in species, on the territory of Katon-Karagaisky SNNP. Mammals are represented by animals with wide South-asian mountain-steppe and alpine habitats. On the one hand, they are species adapted to the climatic conditions and aridity and on the other hand, they are ones that can adapt to existence under the severe conditions of the alpine landscape.

The following species have been registered on the territory of Katon-Karagaisky National Park: bone fish - 11 species, amphibious animals - 2, reptiles - 4, birds - 284, mammals - 65; totally - 366 species or 96.8% of region's fauna (from 378 species of the Southern and Central Altai).

Among bone fish, four of them permanently inhabit the territory of SNNP. They are taimen (Hugo taimen Pallas), which is in the Red Book of Kazakhstan; Lenok, whose local name is uskuch (Brachynystax lenok Pallas), grayling (Thymallus arcticus Pallas) and Ide (Leuciscus leuciscus Linne). In the western part of the National Park territory, in the Bukhtarma River have been spotted sazan, pike, roach and some other fish which are not typical for this region. 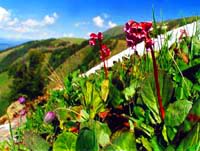 As with the majority of large predators living in a specific eco-niche, in this case in the mountains, the snow leopard is not a numerous species. It is rare in the Altai as well as in the Eastern Kazakhstan mountains. Within the bounds of the SNNP are 12-15 individual leopards, including animals coming to the territory from the nearest regions. 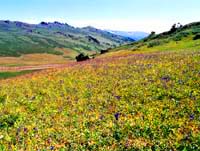 Moving up through cedar forests and alpine meadows overgrown with bright flowers, we come to Burkhat pass (2,141 m), where snow leopards and mountain goats (tacks) live. When the weather is fine one can see from here a splendid panorama of the Katun mountain range, crowned by the sparkling double-headed mountain Belukha (4,506 m) - the highest point of the Altai and Siberia. It is visible for more than 100 km.

Sharply wandering 1,000 meters lower, a bird's eye view allows us to observe the beauty of the Bukhtarma river valley. In half an hour we drive on good asphalted roads once more.

We have driven 60 km from Urunkhaika for a 4-5 hour journey.