Tbilisi is the Capital of Georgia. This enchanting, ancient city is situated along the winding river Mtkvari. Tbilisi was founded in the 5th century A.D.

Legend has it that King Vakhtang Gorgasali of Kartli and his attendants were hunting in the Mtkvari River valley. The King killed a pheasant, which dropped into a spring. When the pheasant was taken out of the water, it had been boiled. It seems the spring was fed by very hot sulphurous waters, which still flow to this day. The King ordered the building of a city in the beautiful ravine, and naturally, the name was derived from the Georgian word, Tbili, meaning warm, and indeed, both the spring and the people live up to this name. On one side, Tbilisi is surrounded by the impressive Mtatsminda (Holy Mountain).

In the 6th century, there was a monastery built on it, called St. David. In the yard of the Monastery, which has a panoramic view of the city, there is a pantheon of some of the great Georgian writers and public figures. At the beginning of the 20th century, a funicular was built which connects the city below with the Mtatsminda pantheon and the summit of the mountain. Both Tbilisi citizens and guests can reach Mtatsminda park in a few minutes to cool off in the shade from the hot summer sun. There are many fascinating historical monuments in Tbilisi, such as Narikala, a 4th century fortress overlooking the city, and Anchiskhati, a basilica built in the 7th century. 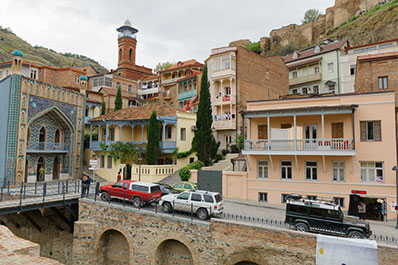 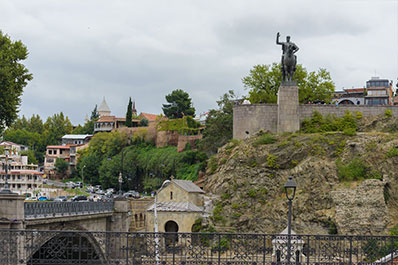 Sioni Cathedral, the center of the Georgian Orthodox Church, is where the Patriarch of Georgia, Ilia II, conducts Easter and Christmas solemn prayers. Tbilisi is a city rich in culture and tradition. Art lovers have a wide array of choices in Tbilisi, especially those who are fond of theatrical arts. Tbilisi is famous for its Rustaveli State Theatre, as well as the Marjanishvili State Theatre, and the Movie Actors Theatre, as well as new, avant-garde venues. World-renowned director Robert Sturua directs productions popular both in Georgia and all over the world. His productions of Shakespearean plays have had great success in England as well as other countries.

The Tbilisi opera and ballet theatre is proud of its world famous ballet dancers and opera singers: the greatest ballet dancer, Vakhtang Chabukiani, one of the stars of modern ballet Nino Ananiashvili, and the famous American choreographer, George Balanchine, was of Georgian origin (his name is Balanchivadze); outstanding opera singers: Vano Sarajishvili, Zurab Anjaparidze, Zurab Sotkilava, Makvala Kasrashvili, Paata Burchuladze and so on. Tbilisi is a world-class city of music. Now let's return to our pheasant. 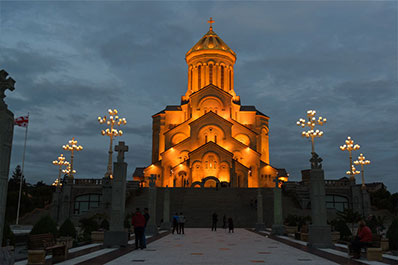 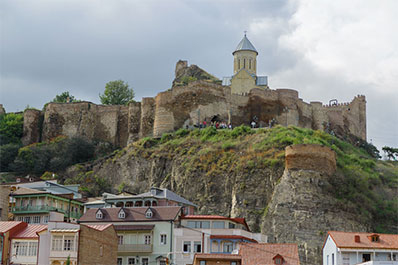 On the place where the pheasant boiled, sulfur baths were built. The sulfuric waters have been famous for their medicinal features from time immemorial. These baths greatly impressed Alexander Dumas, the author of "The Three Musketeers", and they are still impressive to visitors. Tbilisi citizens have their favorite places to relax. These include Vake, Vere, and Mushtaid parks, as well as many small parks around the city. Refreshing lakes on the outskirts of Tbilisi beckon: Turtle, Lisi and a large artificial water reservoir called the Tbilisi Sea, which provides excellent boating and swimming. The population of Tbilisi is fond of sports, mostly football. They are most proud of their Tbilisi Dynamo football team, which won the European Owners Cup in 1981. Tennis, also very popular, can be played at many courts scattered throughout the city.

There is an infinite variety of restaurants in Tbilisi, serving both local and foreign cuisine. However, Tbilisians prefer their Georgian restaurants, as they believe, and many others agree, that Georgian cuisine is the best in the world. You can visit the so-called Sakhinkle, where the unique, delicious Georgian meal, Khinkali, is served. Georgian wines and local beer are quite popular, and not only domestically; they have often won internationally prestigious awards and prizes. Georgian people are known for their exceptional hospitality. Guests are considered sacred, and are treated with a special kindness and warmth. Citizens are welcome visitors with an open heart, ready to assist them in any way, and they are most warm and sociable.

We thank BVT Georgia for their kind informational support.