The Naurzum Nature Reserve is situated on the territory of the Naurzum and Semiozyorski regions of Kostanay Province, 190 km to the south of the city of Kostanay, in the Turgay Narrows where the Tersek, Sipsin and Naurzum Tracts meet.

The largest portion of the latter tract is covered by Naurzum Coniferous Forests.

It is possible to consider the pine forests of the reserve native, as they have been preserved practically unchanged since the tertiary epoch.

And while the birches of Naurzum may be less slender and graceful than those of Russia, nevertheless, they are beautiful, even those which grow near saline lakes. These are of a special kind, the Kyrgyz Birch, endemic of Northern Kazakhstan. They grow in a comparatively small area here, and nowhere else in the world. 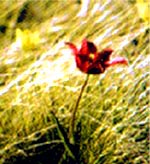 The emblem of Naurzum Reserve is the hissing swan. However, the grave eagle could equally be considered as a symbol of the region, for here its population reaches around 30 couples.

The most graceful animals of the reserve, the beauty of the Naurzum Coniferous Forest, are the roe deer.

Each summer elks dwell in the reserve, and they leave in winter.