Korgalzhyn a wetland paradise The centuries-old culture of Kazakhstan, a wealth of attractions and unique nature charm visitors not only with their beauty but also with their uniqueness. In the very heart of Kazakhstan, 160 km northwest of Astana, awaits the Kurgalja National Preserve. Korgalzhyn National Park is the largest preserve zone in Kazakhstan, occupying an area of about 258.9 million hectares, including 198,000 hectares of wetlands.

Despite being under 3 hours from Astana, and possessing a collection of birdlife that has recently attracted a nomination for UNESCO World Heritage Site status, the Korgalzhyn area remains surprisingly unknown, even within Kazakhstan.

The vast wetland area, a combination of virgin steppe and lakes, is home to wolves, marmots and saiga. However, it is the birds, and the pink flamingo in particular, that are the real attraction.

Located at the crossroads of two migration routes, the wetlands act as a giant motorway junction service station for birds (Lake Tengiz alone has the capacity to feed 15 million birds).

The area, most of which is protected as a 'Zapovednik' (national nature reserve), is home to the world's most northerly population of pink flamingos, one of over 300 species of birds, which includes one of the largest wildfowl population in Asia. Other notable residents include pelicans, cranes and a variety of birds of prey.

Spring and summer (mid April to September) provide the best opportunity to see the wide range of bird life. Flamingos should be resident during the whole of this period. For a fortnight at the end of April and start of May, the steppe bursts into color as tulips come into bloom. Ice fishing is popular during the winter months.

It is set in the Tengiz-Kurgal Depression located at the junction of steppe and semi-desert zones separating the Kazakh sandstone area from the Kokchetau Hills. There are no big trees in its territory. This is a kingdom of stunted shrubbery and grass, solely typical of the steppe.

Here exists the most beautiful feather-grass steppe. The territory of the preserve is the connection of two large lakes, Tengiz and Korgalzhin. The word "tengiz" in its translation means "sea". The total area of wetlands is 159,000 hectares, which is twice as large as Lake Geneva in area, and its water mineralization exceeds the oceans' saltiness by 5-6 times. The preserve's flora counts about 350 kinds of plants, 90% of which are grasses. The fauna includes some 82 types of birds, 33 of which are included in the "Red Book"; they are the black lark, great bustard, crane, gyrfalcon and steppe wind hover. This is the northern nesting habitat of the pink flamingo.

In the territory of the Kurgalja Preserve the luckiest travelers may come across black stork, whooping swan and brand goose; and in the reed-beds wild boars are hiding. From time to time, forest dwellers from Northern Kazakhstan and Western Siberia, such as lynx, roe and elk visit this remote territory.

On its territory there are no large trees, as this is the domain of low grasses and bushes typical for the steppe area. The Kurgaljinski lakes are rich in fish, including edible species. They are golden and argentine crucian, ide, pike, tench, perch, and roach. Lake Tengiz (which stands for 'sea' in Kazakh) is the largest in the reserve.

It is made unique by the pink flamingoes, nesting on the islands of the ancient lake. Here lives the world's furthest northern colony of these wonderful birds. They lived here even in the Paleocene Period, when the whole Tengiz-Kurgaljinski Depression was covered with the Tetis Sea.

The area's low profile, and restrictions accompanying the Zapovednik status, means that tourism is relatively new and small-scale. Nonetheless, the area is familiar with receiving birdwatchers from around the world and its low profile has helped it avoid the environmental damage seen in other more popular natural areas.

The small town of Korgalzhyn, just outside of the Zapovednik, provides a good starting point and base for visits to the area.

Easily reached by bus/minibus from Nur-Sultan, it is home to the Zapovednik administration offices, a nature museum and a number of home stay guesthouses. The town's small shops provide the final opportunity to stock up before entering the Zapovednik.

Visitors to the Zapovednik must register and buy a permit at the administration offices before entering. It is best (and essential if arriving at the weekend) to inform the administration, before arriving, of your plan to enter.

Their offices also house the nature museum; a collection of exhibits showing the wildlife and history of the Zapovednik. Visits to the museum include a guided tour.

Relax in a friendly home stay guesthouse which provides simple, but comfortable accommodation. Here you will be provided with your own private bedroom and the opportunity to taste the delicious flavors of locally and home-grown ingredients featuring in the meals served by trained hosts.

Although not having the luxurious facilities of a five star hotel, the warm welcome and homely surroundings are highly rated by visitors. Hosts quickly become friends that you will remember for years to come.

Details of home stay guesthouses can be obtained by contacting the local environmental organization, Rodnik. Again, it is best to phone in advance of arrival. They can also arrange tours outside of the Zapovednik that provide similar opportunities for viewing the wildlife.

Within the nature reserve, a simple guesthouse and wooden cabins are set alongside Lake Sultankeldi at the scientific station of Karajar.

Alternatively, Akmola Tourist, based in Astana, can arrange a packaged trip to the Zapovednik including accommodation at Karajar, transport and entrance. 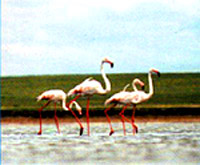 Escape to a landscape unchanged by time.

A steppe landscape of wide horizons and vast skies.

Allow your senses to be refreshed by the fragrance of wild plants and the music of birdsong.

Share the home of flamingos and pelicans in one of Asia's richest collections of wildfowl.

Enjoy the warm hospitality of local people and the glow of the setting sun.

There is a daily scheduled service of four buses/minibuses (marshrutki) in each direction between Astana and Korgalzhyn (journeys take 2 - 2.5 hours):

Tickets should be bought at the bus stations at least a few hours before traveling as services are popular and can be subject to change. (Korgaldzhyn bus station is open only 30 min. before departures).

Taxis at Astana train station will travel to Korgaldzhyn. Rodnik can recommend drivers from Korgalzhyn. (Fares are generally lower in the morning when the driver is confident of finding a return fare). If you make advance arrangements to enter the Zapovednik it may be possible for the driver to include a pick up and drop off from Astana station for an additional fee.

The Zapovednik administration can arrange for drivers to take visitors into the nature reserve. The drivers' knowledge of the current location of the wildlife is invaluable given the large size of the reserve.