Armenia - acknowledged as one of the cradles of civilization - is a beautiful country with a sophisticated people and a long and cultured history. Be the part of it visiting and discovering this ancient heritage.

Day 1.
Arrival, transfer to the hotel in Yerevan and check-in.

Day 2. City Tour and Garni Pagan Temple and Geghard Monastery
Visit Matenadaran - The Institute of Ancient Manuscripts, Matenadaran, contains about half of the existing 30,000 Armenian manuscripts throughout the world. More than 11,000 Armenian codices and 3,000 fragments, 3,000 original or copied manuscripts and fragments written in Persian, Hebrew, Arabic, Syrian, Ethiopian, Georgian, Greek, Latin and other languages, as well as 300,000 archival documents, 2,000 old printed books and 125,000 units of scientific literature are under custody. There are earlier fragments of Armenian manuscripts from the 5-6th centuries.
Drive to Garni village.
Visit Garni Pagan Temple - The ancient architectural complex of Garni (3rdcentury B.C. - 1st c. A.D.), On the triangular plateau, plunging from a height of 300 meters to the rushing River Azat, stand the ruins of a powerful fortress with huge basalt slabs designed for defense of the royal summer residence of Armenia. The Hellenistic Temple of the Sun, dedicated to Mithra, was built by the Armenian King Trdat in 66 A.D. Visit Geghard Monastery: The cave monastery of Ayrivank or Geghard, six kilometers from Garni, dates back to the 4th century. The spear that pierced Christ's body is believed to have been kept here. That is why the monastery was named Geghard ('Spear' translated from Armenian). It is a unique complex of churches carved into the mountain and linked to each other by a series of tunnels and caves.
Optional Vocal concert at Geghard Monastery.
Back to Yerevan.
Overnight in Yerevan.


Day 3. Yerevan-Khor Virap Monastery-Noravank and Areni Winery in Yeghegnadzor
Drive to Khor Virap.
If you want to see Mt. Ararat at its best, you should visit Khor Virap. The latter was a royal dungeon in Artashat (Artaxata), the ancient capital of Armenia, just in front of the biblical mountain.
Visit Noravank - The architectural complex of Noravank (13-14thcenturies), located on a steep precipice in the province of Vayots Dzor.
The complex comprises the main Cathedral of St. Karapet, built by Liparit Orbelian in 1216-23, as well as the church-sepulchers of St. Gregory and St. Astvatsatsin. Visit Winery and tasting in Yeghegnadzor Village.
Back to Yerevan.
Overnight in Yerevan.

Day 4. Lake Sevan - Dilijan-Haghartsin- Monastery
Lake Sevan is the largest alpine lake in the world. Lake Sevan has been famous for its fish since ancient times. Its trout called Ishkhan, meaning 'Prince of Fish', was served at the banquet tables of Armenian and foreign kings.
The Sevan Monastery on the peninsula (once an island) was built in 874 by Mariam - the daughter of the King Ashot I, the founder of the Bagratid dynasty. One of its churches is called Arakelots (Church of the Apostles), the other - Astvatsatsin (Church of the Virgin).
The excursion Continues into Dilijan, a small paradise with its charming nature and extraordinary architecture.
Visit Haghartsin Monastery (10-13thcenturies), hidden in a woody corner of paradise, some ten kilometers away from Dilijan, is the tenth century Church of St. Gregory. Later the small Church of St. Stepanos (1244) and the main Cathedral (1281) of the monastery were built. The refectory (1248), used for reception of guests and pilgrims, is a fine sample of medieval secular architecture.
Drive to Dzoraget in Alaverdi.
Overnight in Lori Region at Tufenkian Dzoraget Hotel.

Day 5. Haghpat and Sanahin Monasteries in Lori Region
In the northern province of Lori, in a wooded area near the city of Alaverdi (178 km from Yerevan), there are famous medieval monasteries. The 10th century Sanahin Monastery with its ancestral sepulcher, university, library and scriptorium was the administrative and religious center of the Kingdom of Kyurikians. The complex includes the churches of St. Astvatsatsin, Amenaperkich and St. Gregory. There is a medieval bridge (12th century) built by the Queen of Vanen on the road leading to the monastery.
Visit Haghpat Monastery - The Monastery of Haghpat is located eleven kilometers from Alaverdi, on a large and high plateau surrounded by deep ravines. It was founded in 976. Along with the main Cathedral of St. Neshan, there are several churches, a refectory, a scriptorium, a belfry and some tombstones. Both are UNESCO World Heritage sites.
Back to Yerevan.
Overnight in Yerevan.

Day 6. Etchmiatsin Cathedral-Zvartnots Temple-Yerevan
Pilgrimage to Etchmiadzin Cathedral, the first official Christian church in the world, built in 301. Participate at Holly Mass at Etchmiatsin Cathedral Etchmiatsin, called New City and Vagharshapat in the past, lying 20 km from Yerevan, is the city where the Mother Cathedral - the throne of the Supreme Patriarch and Catholicos of All Armenians - is located. It was founded in the beginning of the 4th century A.D. 'Etchmiatsin' which means 'The Only Begotten Descended'. The Cathedral, constructed on a site of a former pagan temple, was rebuilt on several occasions, and therefore has architectural features from various periods. The four bases date back to the 5th century. Later a bell tower, three rotundas and a vestry were added. The frescoes were painted in the 17-18thcenturies. Valuable church treasures and manuscripts are displayed in the museum of the Cathedral.
Visit Zvartnots Temple- The ruins of the famous Zvartnots Cathedral (7thcentury), a 49-meter-high three-tiered pyramidal church of unusually perfect form and beautiful carving, are located 2 kilometers from Etchmiadzin. Built by Catholicos Nerses III in 643, the Cathedral collapsed in the earthquake of 930 A.D.
Back to Yerevan.
City tour to Tsitsernagaberd Memorial Monument and Museum. Along the way you will get to see the Sports and Concert complex, Kievyan Bridge, Baghramyan Avenue, the Presidential Palace, Academy of Sciences, National Parliament, Writers Union, and the Opera House.
Visit Food Market and Arts & Crafts Vernissage for souvenir shopping.
Overnight in Yerevan.

Day 8.
Check-out from the hotel, transfer to the Airport & departure from Yerevan.

We hope you like the program and assure you that we are absolutely open to any suggestions to increase the range of our services for the complete satisfaction of our clients and are happy to meet your special requirements.

Our tour operator will work closely with you or your travel agent to carefully prepare an itinerary based on your stated interests. 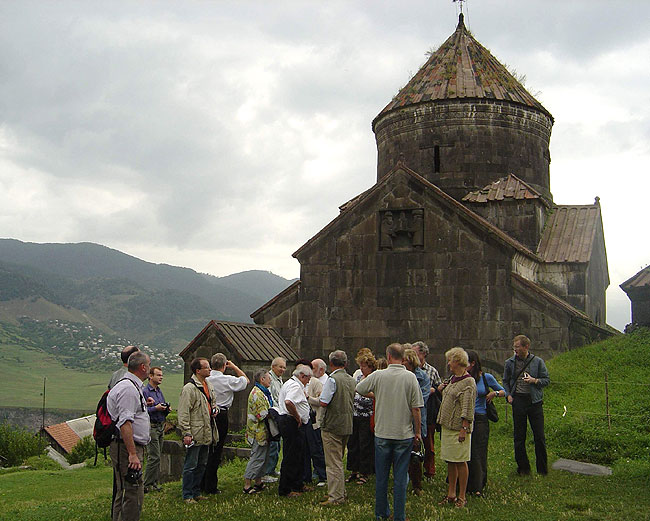 No tour photos have been posted yet.

No tour reviews have been posted yet.