It would be difficult for antique and art lovers to find a better treasury of rarities than Armenia. Armenia, or as it is called "Stone land", is like an open - air museum both in terms of the nature and the art. It is a country that is open to anyone who is ready to get off the road to climb the mountains or go down to a hard - to - access gorge.

Yerevan, the capital of Armenia, is situated along the Hrazdan River, which is not navigable. The master architectural plan for modern day Yerevan was drawn up by Alexander Tamanian from 1924 to 1926. According to Armenian tradition, the name of Yerevan is derived from an expression exclaimed by Noah in Armenian while looking in the direction of Yerevan, after the ark had landed on Mount Ararat and after the flood waters had receded: "Yerevats" (it appeared). 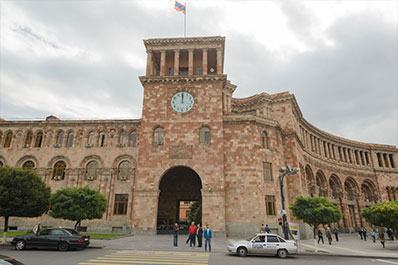 The House of the Government of Armenia 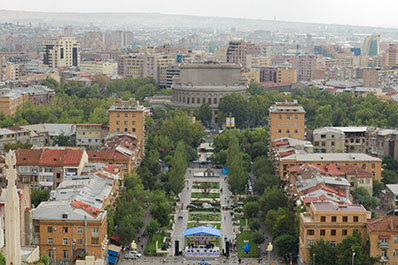 View from the top of Cascade

Though Yerevan is a very old city, as it has the history of 2790 years, it can be compared with a number of the most developed countries in the world. Although Armenians have always conduced to maintain the ancient and traditional features of their culture, today's Armenian culture has a modem tendency. There is a wide choice of restaurants, hotels and bars and quite a number of good orchestras playing in Yerevan. People look very modern and while sipping an espresso in some of the hipper bars, you could think you were in one of the European courtiers.

The corroborative evidence of flourishing Yerevan is the new built residential buildings as well as business centers: the most vivid one among them Citadel Business Center on Koryun Street, the new - constructed building of Municipality and Northern Avenue, located in front of Swan Lake on Toumanyan Street. These buildings bring the city to a civilized shape.

The central part of the city involves three main squares: the Republic Square, the Shahumian Square and the Freedom Square. The Republic Square, which is the gemstone of the city, is intersected byAmiryan Street, Abovian Street, Nalbandian Street, and Tigran Mets Street. The square is framed with the buildings of the Government, Marriot Hotel, the Foreign Ministry, Post Office, designed by Alexander Tamanian in the best traditions of the Armenian architecture to make up a beautiful ensemble - a masterpiece and truly national work of art. The Art Gallery, the History Museum of Armenia and the "singing" fountains are also to be found in the Republic Square, which combine music, water and color. The Freedom Square is adjacent to the State Opera and Ballet House making up another picturesque ensemble. 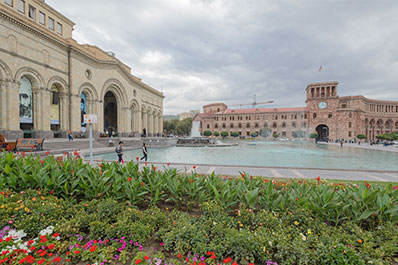 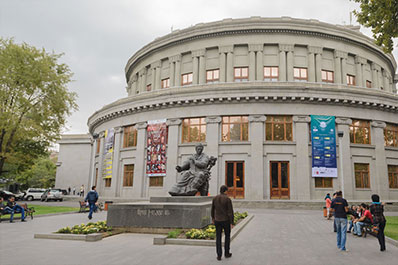 The people of Yerevan are attached to Abovian Street, perhaps because it was once the city's main thoroughfare or perhaps because, despite modern trends, it has retained many features of the good old days.

That is why the visitors should start sightseeing from Abovian Street, which begins from the Republic Square and comes to an end in a circular square, in the centre of which stands the statue of Khachatur Abovian. Here you'll find "Moscow" cinema, Katoghoke church.

The busiest street is Mashtots avenue, which is one of the main arteries of the city. It starts with "Рак Shuka" (Closed Market), goes up to "Nairi" cinema, and then ends at the steps of Matenadaran - a unique research institute and museum of ancient manuscripts. Behind the Matenadaran you'll find "Victory Park", an attractive place for kids. The others are Luna Park, Children's Railway (at Hrazdan Canyon), Zoo, Botanical Garden, Water Land (on the way to Sevan), Swan Lake, which serves as a Skating Rink in winter, as well as Marionette Theatre, Puppet Theatre, Khnko Aper Library etc. 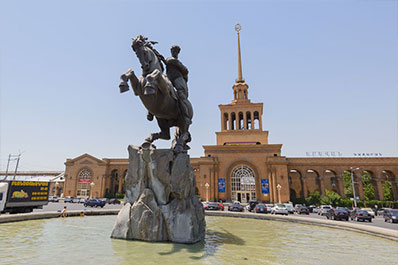 Yerevan railway station and Statue of David of Sassoun 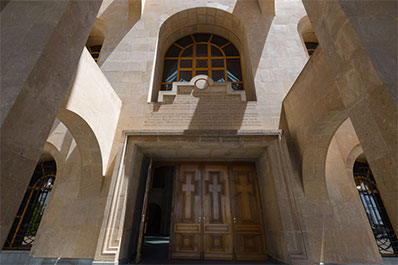 Tourism in Armenia has been developing every year and the capital city of Yerevan is one of the major tourist destinations as it has the majority of hotels, restaurants, bars and nightclubs in the country. In summer, central Yerevan can feel like one big cafe, with the Opera area being their capital. It remains light out until late, as people are out drinking coffee and fruit smoothies, eating pastries and crepes. The days can be hot, so the nights are perfect for sitting out. In the winter it is much quieter out, yet the many teahouses across downtown Yerevan are quite packed. The main transport means are buses and mini-buses, costing 100 AMD. There are also taxi services, the base price of which is 800 AMD, and 150 AMD for a kilometer, but the most productive and cheapest way is Yerevan Metro, costing 50 AMD.

If you are fond of exhibitions, go to Saryan Park, adjacent to Opera square, and have a good time there. Each Saturday an exhibition is held in Saryan Park, from where you will be able to buy a handmade picture you liked. No visit to Yerevan would be complete without a few hours spent wandering in the "Vernissage". Each Saturday and Sunday exhibition - sales are held in the "Vernissage", from where you can buy souvenirs, jewelry, handmade arts and crafts, silverware, paintings and carpets. It is situated between Hanrapetotyan and Khanjian streets.