Today, mountaineering is one of the most popular forms of extreme sport in the world. The Republic of Kazakhstan has unique mountaineering resources, among which are the Northern Tien Shan Mountains. They are located in Almaty Region. Another name for this place is 'Zhetysu-Semirechie', meaning "Land of seven rivers", all of which drain into Lake Balkhash. Zhetysu is Kazakhstan's pearl. It is a beautiful and unique place. Striking secrets are held here, where the routes and destinies of many ancient tribes and nations have crossed through the millenia.

The Central Tien Shan is located in Central Asia, mainly in Kyrgyzstan (the western part) and China (the eastern part), and partially in Kazakhstan and Uzbekistan. It stretches for 2500 kilometers from west to east and for 300 kilometers from north to south. The highest points are Pobeda Peak (7439m) and Khan-Tengri Peak (7010m). Alpine landscapes are characteristic of the Central Tien Shan: pointed crests are covered by grey - turquoise coloured glaciers and dazzling snow fields; multi-colored alpine meadows flow next to dark coniferous Tien Shan spruce forests.The Zhaili Alatau, the most northern range of the Tien Shan, stretches laterally for about 400km, forming an arch extended southward.

The central part of the range, stretching for 170 km and ranging from 33 to 50 km in width, towers between the Kumbel pass in the west and the Amanzhol pass in the east. The highest point in the range is 4973m above sea level (Peak Talghar).

Among mountain climbers the region of the Maly Almaty gorge and the Bogdanovich glacier adjacent to it are the most popular in the Zhaili Alatau. The glacier is in the Levy Talgar River basin, but most convenient routes to climb its peaks are from the Maly Almaty gorge. Many gorges such as the Bolshoi Almaty, Aksai, Kargaly, Kaskelen, and Chemolgan are pristine, with places wher man has never set foot.

The western branch of the Maly Almaty spur - Kumbel - begins at the snowy and icy Pogrebetskii Summit (4231m), followed by Lokomotiv Peak (4182m) from which the spur turns north, keeping its direction till Peak Kosmodemiyanskaya (4108m), where it turns northwest to the Molodezhny Summit (4147m).

Behind Molodezhny pass (3735m) the Kumbel spur descends, losing its glaciers, and branches into several forested ridges. In the Bolshoi Almaty River basin, the Soviets spur should be mentioned. It stretches from Lokomotiv Peak towards Bolshoi Almaty Lake. There are two summits - Gorelnik (4000m) and Soviets Peak (4317m) with a glacier of the same name on the northern slope. The nearest valley to the city of Almaty is that of the Maly Almaty River. The upper valley is located in the first branch of the Maly Almaty spur.

Behind the two-headed Partizan Peak (4390m) is a spur 4410m high in the Ordzhonikidze summit massif. Then there is a sharp saddle, resulting in the Ordzhonikidze pass (3980m), which stretches from the Igly Tuyuk Su glacier towards the Eastern Ordzhonikidze glacier.
Summits located to the north of the pass are rocky. among these is Mayakovskii Peak (4208m) with its vertical 400m walls. Its upper part consists of marbled limestones and the lower one - of red granites.

There is a highly eroded crest of summits: the Great Patriotic War Peak (Velikaya Otechestvennaya Voina) (4050m) and Antikainen (4000m) behind the peak. Then follows the snowy saddle of Antikainen pass and a beautiful rocky peak named after Manshuk Mametova (4194m).

Behind Manshuk Mametova pass (3750m) to the north of the summit of the same name, the Almaty spur branches for the second time. There are the "Hero Peaks" - Panfilov Guardsmen (4120m), Teacher (4045m), Pioneer (4031m) and the Amangeldy summits along its western branch.

The last are the Abai (4010m) and Shkolnik (3590m) peaks. Then the height of the spur declines sharply. Behind Talgar pass (3200m) the ridge branches and ends to the south of the city of Almaty.

It is necessary to mention Amangeldy Peak, at 4000m. Every year on December 22, the most courageous mountain climbers of Kazakhstan gather at the Memorial to Fallen Mountaineers near the Tuyuk Su Gates to take part in a speedy ascent to the summit of Amangeldy Peak (4000m). The ascent is dedicated to the memory of Anatolii Bukreyev, a well known Kazakhstani mountain climber. Anatolii Bukreyev was one of the greatest mountaineers in the world. He set many records for speed climbing in the Pamir, Tien Shan, Karakorum, and Himalaya and in the mountains of Alaska. 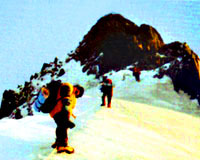 The first mass Alpiniad (ascent) in the history of sovereign Kazakhstan was made to Abai Peak (4010m) in 1995. The event was dedicated to the 100th anniversary of the great Kazakh scholar, Abai Kunanbayev. The President of the Republic of Kazakhstan, Nursultan Nazarbayev, took part in the ascent. Escorted by veterans and young Kazakhstani mountaineers, he reached the top of the peak.

The eastern branch of the Maly Almaty spur stretches for 7 kilometers. At the very spot where it branches, the snow dome of the Karlytau summit (4100m) rises. Separated from the Karlytau by Komsomol pass (4000m), the popular Nursultan Peak (4376m), well seen from the city of Almaty, towers majestically.

The first name of the summit was Maly Almaty Peak, later renamed Komsomol Peak on July 11, 1935 after the 1st Komsomol alpiniad, and in 1998 it received a new name - Nursultan Peak. The name was given to the summit in honor of the birthday of the first President of the Republic of Kazakhstan, Nursultan Nazarbayev. The decision was made by the participants of the mass ascent. The mass ascent has become a great tradition. Now every year hundreds of people strive to conquer this peak, and those who are well trained take part in speedy ascents are successful. To the north of Nursultan Peak is an eroded ridge with the Fizkulturnik (4068m) and Chkalov (3892m) peaks. 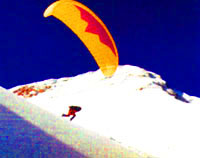 The topography of the Maly Almaty spur would be incomplete without its lateral ridges, the summits of which are of interest to mountain climbers. Thus, in the north, on the eastern ridge of the Ordzhonikidze summit there are two unconquered peaks. On the short eastern ridge of the Karlytau summit, beautiful pointed towers of Aristov Peak (4102m) rise, and in the north - the eastern ridge of Komsomol Peak tower numerous summits: Snow plateau (3800m), Lastochkino gnezdo (3880m), Uzhbinka (3910m), and Trezubets (4089m).

The training camp of the Centre for mountain rescue and guide training, the Tuyuk Su alpine base camp, is located in the Maly Almaty gorge at a height of 2300m. Anyone who so wishes can take a 2-week course in mountain climbing. Afterwards, for those who complete the course are given certificates in mountain climbing.

The Zhaili Alatau range attracts not only professional mountain climbers, but fans of skiing, mountain biking, paragliding, snowboarders, mountain hikers and city folk who are into adventure tourism. The nature of Almaty oblast is unique. You can cross all climatic Zones from deserts to glaciers within one day's travel with little effort.

The Zhetysu land harbours many unique things which attract travelers and those who are interested in the ethnography of the world, and won't leave even the most exacting traveler disappointed.

Mountaineering tourism is the most highly developed type of tourism here. Ascent routes are diverse: rock, snow/ice and combined. Ascents are undertaken year round, but the optimal period is June - August. 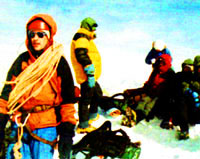 Guests may stay overnight at the Kegen and Narynkol settlements, taste the national drink "Kumys", and get acquainted with the traditional way of life of the Kazakh people.

Khan-Tengri Peak is the most northerly 7-thousander in the world, and for this reason it attracts a great number of travelers from all over the world, in spite of the fact that conquering its summit requires extreme alpine climbing. A most beautiful marble summit crowns the peak. 1200 years have passed since Khan-Tengri was first mentioned in Chinese chronicles. In 1931, a Ukrainian mountain climber, M. P. Pogrebetskii, was the first to conquer it. He chose a route along the southern side of the pyramid. The route is considered classic to this day.

Khan-Tengri Peak is located in a remote region on the border of Kazakhstan with Kyrgyzstan and China. The majority of travelers fly to the base camps at the foot of the Peak by helicopter. It takes a minimum of about 14 days to reach the top.

Due to the proximity of Khan-Tengri to the Chinese border, a special entry permit is required.