Thanks to their nomadic lifestyle, Kazakhs learned how to skillfully handle and ride a horse from a very young age. Out of this everyday necessity, the cultural phenomenon of equestrian games was born. Some of these competitions served solely to improve the agility and skill of the riders, while others were purely for entertainment.

Equestrian games remain an integral part of the traditional culture of Kazakhstan, and to this day they are held at major celebrations throughout the country. There are several main varieties of traditional Kazakh equestrian games:

Alaman Bayge is a more complex race in which participants pass over rough terrain for long distances of 30 -100 km. Special endurance is required from horses, and this game demands skillful calculations and tactical movements from the riders, so this challenging competition is not for everyone. The winner is typically rewarded a valuable prize.

Today, a simplified, short-distance variation of this Kazakh national sport is often played, and almost anyone who can ride a horse may participate. 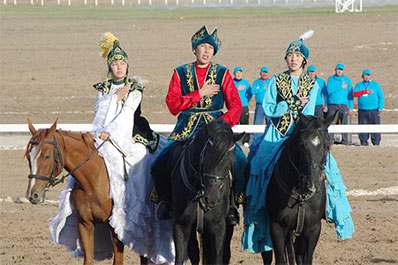 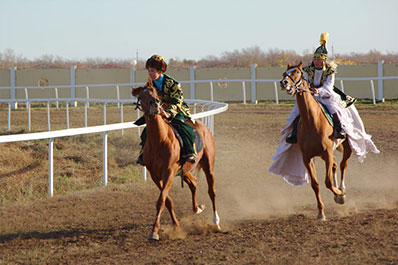 Audaryspak is a fascinating Kazakh national game whose original purpose was to improve the physical fitness of riders, their dexterity and ability to stay in the saddle. The goal in this fight is to throw your competitor out of their saddle, with the rider who first succeeds declared the winner. Audaryspak is held during festivities and holidays, but also exists as an independent sport.

Kokpar has been played for centuries and is by far the most popular Kazakh traditional game. In former times the game was quite violent, with participants beating their opponents with a whip or using physical force against them. The kokpar of today, however, is much more mellow in comparison.

Two teams take part in the game, with each team consisting of 8-12 players. The playing field is roughly the size of two football fields, with a goat’s carcass used instead of a ball. Participants on horseback fight to throw the carcass at the goalpost of their oppoenents as many times as possible. Opponents wrench the carcass from each other and pass it on to teammates.

The modern rules of kokpar appeared only in 1966 and were modified as recently as 2019. Current play resembles ice hockey, from which such regulations for shootouts, playing time for three periods of 20 minutes each and penalty removal of a player from the field for 2 minutes were borrowed.

Today, kokpar is an official sport with its own national federations, and is even studied in some sports schools in Central Asia. Kokpar remains a key part of Kazakh national identity.

In the Kazakhstan sport of Kume alu (Coin Pick-Up), participants advance from start to finish by picking up coins that have been scattered across the field and wrapped in a small scarf. The one with the most coins at the finish line wins. There is also a children's version of this game in which children collect coins while pretending to be horsemen. The children, like real riders, should remain constantly in motion for the duration of the game. 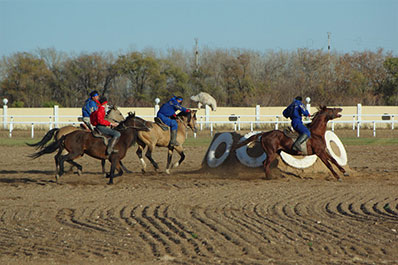 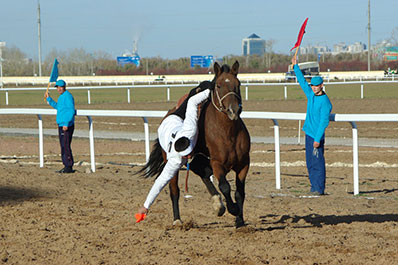 Kyz kuu, one of the most popular traditional games in Kazakhstan, literally means "catch up with the girl." In this fun tradition a young man tries to catch up with a girl, both on horseback, before she reaches the finish line. If the boy succeeds in catching her, he gets to hug and kiss the girl while they’re both galloping. After that, the players change roles. Now the girl chases after the guy, and if she catches up with him, can hit him with a whip.

Tymak Uryp Zhigu is a traditional Kazakh game usually held during celebrations, and anyone with a horse can participate. While riding blindfolded with a whip, players must knock down a hat perched on a pole. After the player mounts his horse, he is blindfolded and spun around three times to disorient him. The participant then gets three attempts to knock down the hat. If he’s unsuccessful, he can “buy” a few more attempts in exchange for a song or dance.

Kazakh sports were not limited to the equestrian realm. The Kazakh people are renowned even today for their prowess in kazaksha kures (Kazakh wrestling), one of the oldest traditional Kazakh sports. In this game, two participants must try to force the shoulders of their opponent to the ground – but they cannot grab each other below the waist or lie on the ground.

Wrestling traditionally took place at large celebrations, holidays and fairs. There, clans would honor their most pronounced wrestlers. Among the Kazakhs, wrestlers respected and appreciated one other.

Today, judo, jiujitsu and other martial arts are widely practiced throughout the country, and football remains a widely popular sport among young and old alike.

Kazakh national games were not limited to official sports but included fun and games for all ages:

Children from the village would gather in the field to play shesheke (mommy) on warm summer nights. They would hold on to each other’s hems and walk in a line, mimicking a discussion between a mother and her child. Shesheke was a great way for the children to expend energy, to learn independent play and develop their verbal skills through the recitation of the game’s simple poetic phrases.

Khan was a winter game for boys, in which the children’s primary toy – sheep and ram bones- represented soldiers and their khan. Both teams had to capture the ‘soldiers’ by hitting them with other bones, without hitting the Khan itself. Khan helped the boys to develop accuracy and dexterity, skills they would need throughout their lives

Asyk was a popular children’s game played both in summer and winter. Two boys would have a target and attempt to hit it with their sheep bones from a distance. If one hit the target, he could confiscate a bone from his opponent’s arsenal. He would continue throwing until he missed, and his playmate would then get a chance to win back lost bones. The game is still played in some rural areas in Kazakhstan.

As its name suggests, this game was played in the summer pasture under an evening moon. Both boys and girls would gather and divide into two teams, holding hands and standing opposite each other at a good distance. A child would be called from one line to the next, and in the manner of Red Rover, had to break through the human barrier. If successful, they could choose one person to join their team. Parents believed that ai kerek provided great physical training for their children.

This game was played mostly by boys. In this game two boys must lift each other onto their backs while simultaneously singing songs. Boys would be paired according to their body weight. As they lifted each other, others would watch them. Should one of the boys have difficulty lifting the other and forget to sing, everybody would laugh. These songs were typically composed by the boys themselves, and usually would be about their parents, their fathers’ tools or their housework.

Children usually played hide-and-seek around mines or a large settlement of yurts. A child would stand at the goal and be blindfolded while the others hid. If the seeker found the children, he won, but he had to be quick before the children raced him back to the pole. The game approximated bird hunting and helped the children to develop logic and agility.

In this game a boy or girl would be blindfolded to act as the sokyrteke. Other players would touch him and run away, and the "blind wild goat" had to catch them. If the blindfolded boy was perceptive and quick, it wouldn't take him long to notice who was nearby and catch him. The newly caught player would then become blindfolded. This game taught children how to be aware of their surroundings and how to escape difficult situations.

Belbeusok (Hit with a sash)

"Belbeusok" was a game for teenagers and adults. All the members of the game would sit in a circle and one of the players would quietly place a sash behind someone else. Upon noticing the sash, the person had to jump up and run after the first player. Once caught, he would hit him with the sash and retake his seat. The sash would be placed behind someone else until everyone had a chance to participate.

Belbeusok provided a way for young people to meet and for Kazakh girls to spend time with their friends unescorted by an adult.

Played in warm weather by children and adults alike, the players were divided into two teams. A leader would throw a white bone into the air, and everyone had to run and look for it. Whichever team found the bone first and brought it back to the leader would win the round, and the game continued until one team was declared the overall winner. Players could also block one another to prevent the opposing team from reaching the leader.

This remains one of the most popular games in Kazakhstan. Young men and women would gather, and while teenagers could watch, they were not allowed to participate. The altybakan swing is set up beforehand using six logs and a thick rope. Participants would dress up for the event and sing folk or love songs while on the swing.

Today, Altybakan is a popular game at national holidays and special competitions.

Ot oiyny was essentially a summer campfire. Young and old alike would gather to warm themselves near the flames and to sing, dance and tell stories to one another.

Youth were divided into two teams of roughly equal strength. The team that pulled their opponents across the line three times in a row were declared the unbeatable winners. A second version of this game was played at wedding parties. The rope would be stretched before the bride’s buggy and she was jokingly told that she could not cross the rope without first offering payment.

Tobyk was particularly popular with older people, as it was said to improve memory, although young people could participate too. Two people would mark separate sheep's patella and hide them. Later, when the other person asked for it, the person who hid it had to locate it immediately. If it wasn't in the specified location, the hider lost the game. Alternatively, if the second person failed to ask for it at the agreed upon time, then the person who hid the bone won the game. A prize would be agreed upon in advance, and the winner would invite the loser to be a guest in their home.

Older men would clean twelve goats’ hooves and paint them red. They would be kept in a special feedbag or small sack with a board made of wood. The men would gather in someone’s yurt to play doiby together, share a meal and drink mare’s milk.