Kazakh clothing was primarily made with materials of cotton, wool and felt. In line with their nomadic lifestyle, many garments were also sewn from hides, leather and furs, providing them with sturdy outfits well-suited to protect them from the harsh conditions of life on the steppe.
Wealthy people were known to wear wide belts with gold buckles and would decorate their clothing with ostentatious patterns and precious stones.
Shoes were worn seasonally: in the summer they wore light boots made of thin leather, and in winter high boots of rough leather, which protected them from the cold. Women’s shoes were typically green or red, embroidered with silk and decorated with small patterned plaques. 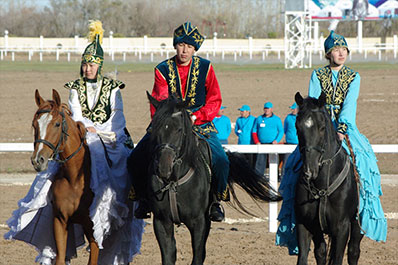 The shapan robe was considered one of the most important articles of clothing for the traditional Kazakh male, as it revealed the status of the man. Worn over a shirt and trousers, Kazakh shapans could be of various thicknesses and colors. Kazakh men would often don a thymak hat in winter and a felt hat (kalpak) or a skullcap (takiyu) in summer, while special festive hats of rich colors and luxurious gold embroidery were worn on special occasions.
In cold weather, men and women both could wear a fur hat (borik) or a sheepskin headdress (tymak).

Traditional Kazakhstan women’s clothing included a long dress with a camisole or a robe-coat worn on top. Mostly sewn from chintz or thin felt, noble Kazakh women could also afford suits of silk and velvet. In cold weather, women wore fox fur or lamb skins.
Embroidery, felt, beads, silver coins and stripes were all common forms of embellishment for women’s clothing. Girls’ hats were usually decorated with eagle owl feathers, which were believed to protect them against evil forces. Only girls and young women were permitted to have red in their clothing, and after thirty years of age this was considered unacceptable. The older a woman was, the less jewelry she would wear. 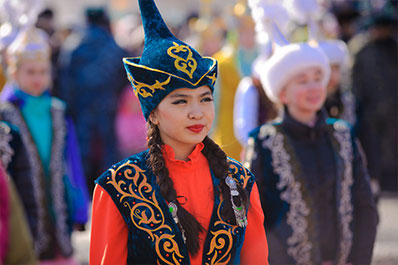 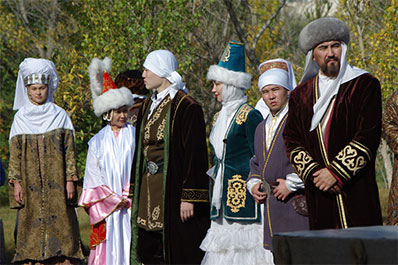 A discussion of Kazakhstan culture would not be complete without the headdress. The headdress had a very sacred meaning in traditional Kazakh society, and many superstitions were associated with them. Thus, it was unacceptable to wear someone else's hat, to throw it on the ground, or to store it in an inappropriate place.
Saukele is a unique headdress that occupies a special place in Kazakh traditional clothing. Only Kazakh brides wore Saukele, the most expensive and beautiful element of their wedding outfit. It was cone-shaped and decorated with pearls, gems, fur muffs, animals’ paws or small coins. At the top of the headdress, whose height was about 70 centimeters, was a tuft of feathers from an eagle owl. Saukele was supplemented with special side pendants, which were long and could reach below the waist. These pendants were themselves decorated with numerous frills. The headdress was then covered with embroidered shawls, and a veil was attached to the front.
After the wedding, the new bride’s costume was complemented with a kasaba hat embroidered with gold patterns. As soon as the woman gave birth to her first child, her headdress would be replaced with a white turban, or kimeshek.