The Senate is established by elections in each region, city and the capital of Kazakhstan deputies at joint session of deputies of all representative bodies of regions, cities of republican importance and the capital. Seven deputies of Senate are appointed by the president.

There 39 deputies in the Upper Chamber, 32 of them are elected, 7 are appointed by the Head of state.

Exclusive powers of the Upper Chamber of Parliament of Kazakhstan.

Give the consent to the appointment by the President of Procurator - General of Kazakhstan and the Head of the Committee of national security.

To deprive of immunity of Procurator - General, the Head and the judges of the Supreme court of Kazakhstan.

Consider the impeachment of the President initiated by Majilis and submit the results to the consideration of joint session of Chambers.

Majilis deputies are elected on the basis of direct, equal and universal suffrage at secret ballot. Deputy corps of Majilis is formed by deputies elected by proportional and majority systems.

There are 107 deputies in the Lower Chamber of Parliament.

Exclusive powers of Lower Chamber of Parliament of Kazakhstan.

Discussion of republican budget and reports of its execution, amendments to the budget, setting up state taxes and duties;

Ratification and denunciation of international treaties of Kazakhstan;

Passes the vote of no confidence to the Government;

Bring an accusation against the President with high treason;

Appointment and discharge from the post by the presentation of the Head of State the Head, the Head deputy, the secretary and the members of Electoral commission of Kazakhstan;

Delegating two deputies to Qualification Board of Justice.

Structure and composition of the government of Kazakhstan.

Principal powers of the Government of Kazakhstan: elaboration and realization of principal tendencies of social economic state policy, defense potential of the country, security and guarantee of public order.
Submission for the Parliament's (Majilis) consideration the republican budget and its execution report, ensuring the execution of the republican budget. 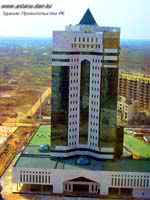 Bring in a bill into Parliament, execution ensuring.

Appointing to a post and dismissal the heads of central executive bodies that are out of government.

Termination of the powers of the Government of Kazakhstan. The government resigns its powers before a new elected Head of state. The government declares its go out to the President when Parliament (Majilis) passes the vote of no confidence. Also tenders the resignation on the initiative of the President and when Prime-Minister resigned. 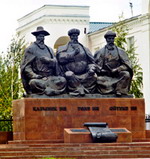 Judicial power is realized through civil, administrative and penal procedure. Bodies of judicial power are the Supreme Court and inferior courts.

The particularity of Kazakh procedure is the absence of arbitration procedure. Economic disputes are resolved in civil procedure despite of subjects.

Courts take the judicial acts in the form of decisions, sentences, determination and orders.

Supreme Court is a high judicial body on civil, penal, economic and other cases jurisdictional to inferior courts, controls their activities and provides clarifications of judicial practice.

Constitutional council decides in the case of dispute the propriety of conduct:

When the objections of the President cannot be overcome then the decision of the Constitutional council is not accepted and constitutional procedure terminates.