The ancient settlement of South Kazakhstan. The monuments of Otrar-Tobe

Widely known across the Orient, the medieval city of Otrar, the principal settlement of the seven cities of the Otrar oasis, is situated near the confluence of the Arys and Syr-Darya rivers. Otrar has played an important role in the history of Central Asia. It became famous as the birthplace of Abu Nasr al-Farabi, an outstanding encyclopaedic scientist. Ibn Khalikan, the Arabic historian of the 13th c. and biographer of al-Farabi, has mentioned that "al-Farabi, means belonging to the city of Farab, which now is called Otrar. That city is situated further than Shash, near the city of Balasagun. It is one of the major cities of the Turks". Otrar was a large political, economical and cultural centre of the historic region of Turkestan, and an important branch of the Silk Roads. It was the only city in the territory of Kazakhstan that minted gold coins, besides of silver and copper ones. Otrar was finally abandoned at the end of the 17th-beginning of 18th c., after being conquered and destroyed by the Dzungarians, following an heroic defense. In the second half of the 18th c. the city already laid in ruins melted under rains, and transformed into a hill called Otrar-Tobe - "The hill of Otrar". The ruins of Otrar have always attracted the attention of researchers. In 1903 the first topographical plan of the site was completed, and in 1904, A.A.Cherkasov and A.K.KIare, members of the Turkestan Society of Amateur Archaeologists, carried out the first archaeological excavations. Since 1969, expeditions headed by K.A.Akishev, of the Kazakh Academy of Sciences, conducted extensive research works at Otrar. The total area of the site is about 200 ha, with the pentagonal tell of the shakhristan dominated by a citadel is rising in its center. The lower layers of the site are related to the first centuries of A.D. and earlier monuments and cultural layers are buried under the multi-meter cultural layers of the Late Middle Ages. This is why the most of monuments revealed in Otrar are mainly of late-medieval date.

1.Bathhouse, 12-15th cc.
The archaeological excavations have revealed various craftsmen's workshops and bathhouses in the territory of the rabat, surrounding the city wall. In the second half of the 13th c. a brick bathhouse was built, to the westward of the south gates of shahristan. It contained 10 rooms, including washing, vapor and massage rooms, the floor was covered with glazed bricks and tiles ornamented with a swastika-like motif on a turquoise glazed ground. The bathhouse was heated through a hypocaust system, conducting hot air in under-floor channels. Water was supplied through ceramic pipes running along an underground tunnel connecting the Bathhouse with the city reservoir.

2. Mosque, 16th c.
In the history of Otrar, the 16th c. is characterized by a certain revival. At this time some abandoned areas of shahristan were redeveloped with new buildings, and the monumental structure of the mosque in the southern part of the central tell is related to this period. The total length of the mosque remains unknown. The width of the building is 15,5 m and it contained a central hall with a mikhrab and side wings.

3. Palace of Berdibek, 14th c.
The city citadel was situated in the southern part of the central tell. Usually a citadel should include a palace of the governor, a mosque and an audience hall. The palace of Otrar has been mentioned in a book of Sharaf ad-din Yezdi who tells that "Timur stayed on Wednesday, 12 rajab, in the Otrar Palace of Berdibek, and all princes, emirs and close people each occupied a separate room". In 1995-99 the remains of a fired brick building were revealed in the citadel area. To date, only 14 rooms had been excavated. During excavations, some glazed bricks and tiles had been found, including those with traces of gilding. Emir Berdibek, whose name the medieval author used to name a palace, was a rajab commander, the governor of Otrar at the end of 14th - beginning of 15th century. The chronicles mainly mention his father Sary-buga, who revolted against Timur, and also his brother, Sheikh Nur ad-din, whom Muhammad Khaidar Dulati mentioned later as a governor of Turkestan region. According to Sharaf ad-din Yezdi, in 1405 on the 14th of January in the reception hall of that palace, Timur had accepted an ambassador of Tokhtamysh, the khan of the Golden Horde. In the same palace, he died one month later, on the 18th of February.

4. Palace mosque, late 14th - early 15th cc.
The excavated part of the Palace was connected to the Mosque, another monumental building of the same period, by a brick wall, which was 40 m long and 1,3 m thick. The dimensions of mosque are 60 x 22 m in plan. The entrance in the centre of the north facade is framed with a portal with corner minarets. Inside the west pillar of the portal there are, preserved, some steps of the winding staircase. The bay of the portal niche is about 6 m wide. Two halls are situated along the entrance (transverse)axis. From both sides of these halls there were galleries constructed on pillars. Judging by the archaeological finds, the interior of the mosque was richly decorated with ceramic facings.

5. Citadel wall, 10-15th cc.
Medieval Otrar had several lines of fortifications constructed at different periods. The external wall defending the rabat is better preserved at the northwest and west sides of the site. The Shakhristan also was surrounded by a thick wall. The best preserved is a part of the Citadel wall near the Palace Mosque of 14-15th cc. The wall of 10-12th cc. is built of hard mud bricks.

The height of the preserved part is of 6 m, and its thickness is of 4 m in the lower part and of 1 m at the top. The archaeological trench cutting the wall has not been completed, so the actual height of the wall is still unknown. In the beginning of 14th c. another 1 m of grey mud brickwork had been added to its thickness on the external face. The next repair of the wall took place in the end of 14th - beginning of 15thc. The additional mud brickwork cases the external face of the massive earlier wall.

6. Well and stone basin, 12-15th cc.
In the centre of the area between the residential part of the Palace and the Palace Mosque, it has been revealed a brick well of 14th c., 12 m deep, 1 m in diameter at the top. A stone basin of 11-12thcc., with some remaining ornament and inscription preserved on its external surface, is exhibited nearby.

Otrar has had a rich and eventful history. It also has strong social connections, not only through its position on the Silk Roads, running from east to west, but also as a crossroads with nomadic routes from north to south. It represents the place in which nomadic people begin to settle in an urban context, within a highly co-operative society, dependant on irrigation. Sayram (Ispidjab 6-18th cc.)

Sauran (10th century A.D.)
Sauran was a mainly fortress. Thanks to special constructions and independent water and food supply, the city was able to withstand a several month long siege. People continued living in the fortress until mid 18th c. In the 14 century, the city becomes the capital of Ak-Orda and at this time represent the blossoming of ceramic production.

Keme Kalgan
According to ancient legends, at the time of the Flood, Noah's Ark(Nukh-paigambar) stopped at the Al-Zhudi Mount in Arabia, the Ararat Mount in the Caucasus, Sinai in Palestine, and the Kazygurt Mount in Kazakhstan.The legendary place is (40 km from Shymkent) in the spurs of the Talass Alatau (western ridge of the Tien Shan mountains). People have preserved about 50 legends about the mountain's holiness. People believe the place where the Ark stopped is still visible on the mountain. Locals call it "Keme Kalgan" (Place of Noah's Ark).

Amazingly, the size of "the local ark" is the same as in the description in one of the holy scripts, "The length of the ark three hundred cubits (150 m.), its width fifty cubits (25 m), and its height thirty cubits (15 m)". The Shilter-ata nature complex is also sited among holy places. Ata-Ana rock symbolizes the forbearers of the human race Adam and Eve. Two 33 meter high rocks have a passage in between through which only a godly person may go. In Shilter-ata there are stone statues of animals described in holy books. The area of the Kazygurt national park seems to have a supernatural aura. 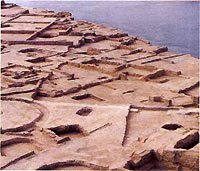 Within 50 km from the modern city of Atyrau, on the right bank of the river Zhaiyk there are ruins of once majestic and famous city Saraijuk (present name - Saraichik). According to a historical version offered by Abulgazi Bakhadur-Khan (1644-1664), the city was founded by Batu (years of rule 1227-1255), brother of Berke (1257-1266). Abulgazi narrates: "Berke-khan, when he became a khan, ... ratified the domains given to him by Batu-khan. He sent large gifts to the Kaan. One day after this event, The Most High Lord enclosed love to Islam in the heart of Berke-khan, and he learned that his belief was untrue..."
More information about Saraichik >>>