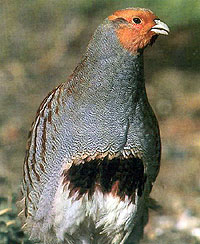 Grey, or Hungarian, Partridge is a very common species. "Grey" is not quite correct because it's only the neck and the upper part of the chest what is grey of this bird. Actually, the bird's head is orange-chestnut; besides, the down part of the chest has a dark-brown horse-shoe-like mark.

Their tail is shorter than the pheasant has and much wider than that of the European quail. The average body-length makes 30-36 cm.

The partridge likes harvested fields and those of cereals where she lives and pastures. She tries to use the same segments of fields and plains every year. The partridge flocks usually have up to 20 specimens in late autumn and winter. A flock of this size usually consists of two nestlings because partridges don't cross with their relatives.

Keklik or Stone partridges can be found on stony and rocky slopes and in the forest area. They are smaller than meadow black-cocks and represent about 33 cm in length. Males and females are similar to each other; they have olive-brown backs, a white stain with a black edge on their bellies and smart sides with alternating black and 8-13 brown vertical stripes.

The stone partridge is exclusively hunted with setters/ pointers. It sits very solidly; when escaping, it hides even more trickily than the pheasant though runs more slowly, and only a dog with a very good sense can find the nestling after they fly apart. The grey partridge is hunted on harvested cereal fields and the neighboring ones as well as on weed borders.

As pheasants do, partridges reluctantly fly up; if not troubled, they are on air not more than a minute or two per day.

Kekliks, which is a bit bigger than grey partridges, prefer severe conditions of steep valleys and canyons. These places are notable for stony piles at the foot and scarce flora, buckthorn (RhamnusTectorum), absinth and juniper being dominant. In late autumn, the birds come a littie IOV.'.T sometimes even reaching cultivated valleys.

If there is a good shelter, a keklik normally stands the set, but such an opportunity is rare. Usually, they first try to escape the hunter running up the slope, and then, if needed, fly up and move down. One may see quite often how an entire nestling runs away ad disappears. If a hunter approaches from above, it is not seldom when he/ she manages reaching the birds at the shooting distance before they start off and fly down the slope.

The best partridge hunt when the birds are so many that a round-up is possible. They fly very fast, hitting is difficult, and an unexperienced hunter would long remember zigzag flying by partridges troubled.