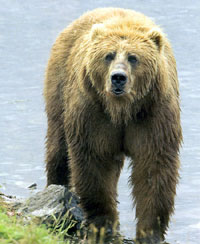 The brown bear is a usual inhabitant of highland forests and rarely appears in lowland forest. It mostly appears in the upper part of the forest belt, where it eats rich grass stems on glades and meadows, looks for worms, insects and other invertebrates under stones and deadfall. By the end of summer, when bilberry, cherry plum and others ripe, bars come down to forests and stay there till late autumn. They switch to high-caloric food such as acorns, beech nuts and especially chestnut. At this time, bears can go through tens of kilometers.

Continent bears eat fish when there is spawning in internal rivers. Other food is not so abundant in the late summer and early autumn, and it is the time when bears can be easily discovered by a hunter because they are more active and spend more time above the forest border to find food necessary for hibernation fat.

The first strong snowing of late autumn or early winter pushes them into dens. Healthy and well-fed bears lie in dens in late December which they arrange in caves, hollows and deadfall piles and fall asleep till spring. 2-3 cubs may be born in a den. In warm and little-snow winters males often ramble and don't fully hibernate because their body temperature doesn't decline. In early spring, bears wake up, full-grown males first, while females with cubs born in sleep or last year's sleep longer.

Waking up in spring, bears again have thick and shiny fur not falling into pieces. At first, they graze in grass, so one should hunt them on grassy slopes and highland meadows. Most bears fetched in spring are shot by hunters climbing with pack horses.

Brown bears can be seen by a hunter watching an area in search of rams goats etc. In autumn, brown bears can be discovered on a meadow or a mountain slope or by a river, where they gather in late summer and autumn for berry places. Besides, they eat leaves, sprouts, young branches, roots and tubers, as well as carrion and animals they can kill e.g. marmots and gophers. Having woken up after winter hibernation, a bear almost exclusively eats young green grass and other plants.

After a hunter sees a bear and makes sure it's a true trophy, it must be reached at the shooting distance. Though seeing rather badly, the bear smells and hears very well. It is very important to approach a bear from a leeward side as quietly as possible. For this, an open highland area is perfect because hiding in the wood or on a meadow with forest requires much more patience. It is extremely important to approach a bear at the shortest distance so that chances to injure it are minimal because injured bears have harmed and even killed a lot of hunters.

The most spectacular and sportive way to hunt a brown bear is to use hounds. The classical variant is simple: hounds are brought to a suitable place; after they have found a fresh trace, they are freed and chase the bear. Hunters follow the hounds. After hounds chase the bear up that is they push it against a fallen tree, thick bushes, open tree roots or a rock ledge, and the bear stops and starts to fight back sometimes injuring or killing some hounds, hunter must approach from the leeward side and shoot. However, most bears are preyed not with hounds, but occasionally when a bear troubled by people may suddenly appear before a surprised hunter waiting for a deer.

In thick forests, tracing is the main method to hunt bears especially when ground is soft from rains.

It is difficult to trace a bear in dryer areas or more open highland, but it can be easily seen from a certain distance because of very good visibility of such places. If the animal is higher than the hunter, aiming must be very accurate: if not killed, it may fall and roll down only to stop in time and reach the shooter. It should be reminded hunting brown bears is currently prohibited in Azerbaijan.

The brown bear is hunted

The hunt season is through September to December.