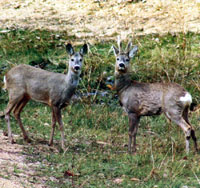 The roe deer is very small; a full-grown male weighs 23-30 kilos, the height in mane being about 70 cm. Six branches are the maximum for males' horns. Females horns are rare and small. In summer, males and females have bright ginger fur, which gets grey in winter, sometimes yellow-spotted; in fact, color variations are numerous, and even black roe deer can be met. In winter, a white stain, or "mirror", appears near the tail root; it is stretched by special muscles and turns into an "alarm disk". The tail is so small that one can hardly see it. In winter, the female has a bunch of long hair sometimes mistakenly thought to be a tail. It can help to distinguish females from males having shed their horns.

There are two types of the roe deer: of field and forest. The latter one, met much oftener, prefers small forests surrounded, if perfect, by meadows or fields because such an environment provides good protection and optimal pasture. The field roe deer prefers open fields and can find a necessary refuge even in the least dense groves and bushes.

The chamois is an antelope specimen found in mostly alpine highland and seldom reaches lower than the forest border. 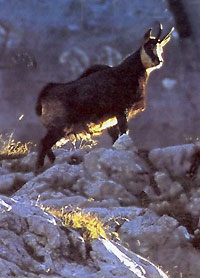 Its height in mane is 75 cm, and the body length is about 110 cm. A full-grown male weighs about 35 kilos, and a female of the same age is lighter by about 10%. In winter, both males and females are dark-brown (almost black), and their summer color is a little lighter. The snout is yellow-white with dark stripes from ears to the nose through eyes. Females and males have horns, which are a hunt trophy. The chamois is the most popular hunting target in Europe. Horns, which are never shed, bend down. Males' have a specific hook shape, and females are some smaller.

Different methods can be used to hunt the roe deer and chamois such as hiding, still hunt, hidden watching from a derrick or a store, luring, also combined with the above mentioned, snow tracing, round-up with hounds or tracing with dogs.

A roe deer can be hunted mostly as round-up with beaters and dogs or only with beaters, yet chase shouldn't be too fast because otherwise the animal is going to give no chance for a lucky shoot. However, roe deer strongly dislike leaving their habitat, so beaters without dogs can miss few animals because they hide very well. Even a very dense line of beaters may be not enough to prevent the roe deer from breaking through back to its habitat, however, too strong or frequent worry may force it to look for other places.

Roe deer and chamois are small animals, and it's better to shoot them from a light rifle. The place to shoot is also small, not bigger than a palm, located a bit higher than the shoulder joint and behind it. It is practically impossible to hit if the animal doesn't stand still. If a male moves slowly, a very weak deliberate noise by a hunter may have it stop still. It is the moment to shoot. Shotguns are suitable not always and only from a very short distance.

Hunting the roe deer and chamois, on should think of improving the population, but not of the best trophy. Males eitherold, injured and ill or ugly though well should be chosen to hunt. To hit a roe-deer male at the age of about six is the best proof of a hunter's high skills.

The roe deer and chamois are hunted

The hunt season is through June to October.