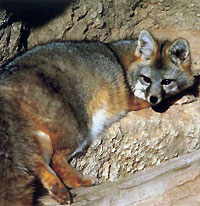 A usual full-grown ginger fox weighs not more than 3-7 kilos. Because of the fur, it looks bigger, but it is actually not bigger than a domestic cat or a small dog. It is usually copper-red or rusty, some places being pepper-grey and white (in the down of the body), while the paws are black; however, significant variations are possible. The top of the rich tail, so-called tassel, is white.

The ginger fox lives in a burrow when it has to bear and grow her cubs, but it doesn't live there in winter. It likes mixed bushes and fields ensuring good watch. There are several methods to hunt foxes. One is classical, riders in red chasing a fox with greyhounds. There is another method practiced by farmers and villagers mostly at night. The key point is to listen to dogs bark. Dogs' masters sit near a fire and listen. A master recognizes his/her dogs by their voices and can say when they lose, re-find a fox's trace or are nearly catching her. Such chase is practiced mostly in the South where good dogs and dogs"'music" (barking) are highly valued. Sometimes, masters follow dogs by cars.

When snowing, foxes can be hunted with two or three hounds. Hunters take off early in in the morning and start from looking for traces. Then they free the hounds and try to catch the fox and shoot it. Foxes run improper circles without leaving their habitat, but it's not easy to shoot them: they are too tricky and have scent and sight to excellent to kill them easily.

Tracing and hiding on snow without dogs make a method of fox hunt when a small-caliber rifle of central shooting is used instead of a shotgun. After hunting mice etc., a ginger fox usually lies to relax. Approaching it at a shooting distance so that nothing disturbs to fire before it sees the danger is a true sport.

Another method getting more and more popular is to hide and entice a fox to the rifle- or gun-shot distance with sounds. Hunting with the imitation of sounds with or without decoy is very exciting. A wounded or scared hare's squeal or an injured bird's scream is usually imitated.

The hunt season is through August to March.