The woodcock (wood sandpiper) lives in humid deciduous, conifer and mixed forests, small forest and along the edges of heather fields where they can neighbor black-cocks. Those are the same places where it is hunted. Th woodcock likes humid places though not so marshy as the snipe because it mostly eats ground worms, larvae and insects. It is rather easy to find out if there is a wood-cock'in Гџ forest: looking for worms in ground, they leave within peculiar round holes; its defecation, white stains as big as coins is well seen too. These birds migrate, so they may be in the forest today and leave on the next one. In cold weather, they move south, and when woodcock hunters hear the North is to get cold, they feel excited. Woodcocks mostly migrate through valleys stretching from the North to the South and seldom do through those in other directions: it is easier for them to search food in light sandy soil or loam, but not in dense clay.

The woodcock has colors which make it practically unseen if backed by yellow leaves, so the bird may lie prone and remain unnoticed. They usually have dark feathejs though there are light- and dark-brown stripes on the body's lower parts. Feet and the beak are faded-flesh-colored or flesh-grey. The wings are rounded, and big eyes are back a lot. When hunting without a dog, one should walk slowly and stop after each few hours in hope that the bird will lose temper. However, hunting woodcocks is the most interesting and effective with a good pointer/setter or spaniel.

This is a twilight bird. During a "marrying" season, the woodcock has dusk and dawn flights to appear before females. A cruising woodcock regularly flies around his area at the height of 6-9 meters slowly waving the wings as if he were an owl; it usually occurs in dusk, but sometimes can be early in the morning. Cruise can last up to an hour. As a cruising woodcock marks his territory, he is going to push away all other woodcocks. He also may generate a high noise similar to sneezing or expectoration which appears from air coming through the first-rank waving feathers. In early March, a male has an elegant "marrying" plumage.

If a female with chicks is troubled, she may pretend wounded. Woodcocks have often been seen flying their nestling between feet to another place for a short distance. Woodcocks can well stand a set and usually let a dog approach very closely before flying up. However, they at first may try to escape and hide in bushes. Woodcocks migrate because they have to avoid cold and frosty weather, when ground gets solid; however, they always return in spring.

Woodcocks are sometimes caught when partridges are hunted in a wet area, and, which is relatively rare, when the pheasant is rounded up.

Its fast and capricious flight of harsh zigzags sometimes confuses those who want to shoot. 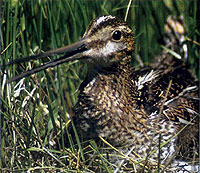 The snipe is similar to the woodcock, but smaller ad so round-like. A usual specimen is about 27-cm-long (against the woodcock's 33-36 cm) with long legs and a long and narrow beak. The plumage is spotted-brown with black stripes some horizontal and others through the eyes.

Like the woodcock's, the snipe's defecation on ground resembles lime painting; looking for food, the bird leaves round holes in the soft soil. However, the snipe eats in swampy areas, and ground worms are not such an important of its diet as that of the woodcocks.

A snipe may be rarely seen on ground, but it can be got to fly up from marsh plants e.g. sedges or reeds.

Birds of open water-logged spaces, snipes should be looked for on wet meadows, tide shallows, and near marshes and bogs. The best way to hunt them is walking such an area with a spaniel or setter/pointer. It is important that the dog bring the game because a snipe which falls into water or on another bank is practically unavailable without fording. As a woodcock, a snipe can daily change its location: a tide shallow with tens of snipes on may be abandoned within a couple of hours. Snipes fly very fast and demonstrate original away zigzags after taking off, but is rectified after few seconds. A hunter who can stay calm and retains shooting has chances to hit the bird. A snipe rises against the wind ad usually returns to the place it was scared off.

The pigeon is the most difficult game-bird to gun-shoot, its fart and capricious flight makes the target extremely hard.

Pigeons are usually hunted when shuttle-flying from rest to eating areas or migrating. Hunters position themselves on ridges or high saddles between hills and shoot flying birds. Usually the higher the better that is to say the more likely are the birds to be within reachable limits. Shooting must be quick, and hitting is difficult. Pigeons fly faster than teals; when wind blows, it hovers and turns around in air streams as skillfully as a snipe does. If a hunter is experienced to hunt highly flying ducks or partridges and snipes, he/she will maybe shoot more pigeons than a moderate wood-game hunter.

The birds are hunted