If the Fann Mountains are Tajikistan’s crowning beauty, Seven Lakes are the diamond necklace adorning their snowy cliffs.  Also known as Haftkul and Marguzor Lakes, this collection of sparkling beauties in the winding Shing River Valley captivates all who are fortunate enough to set eyes on them. Known for their amazing blue waters and surrounding mountain scenery, exquisite particularly in summertime, Seven Lakes has remained one of Tajikistan’s best-kept secrets, receiving relatively few visitors each year.

Each of the seven lakes has its own name and distinct features. The first lake is Nezhigon, whose name in Tajik means “Eyelashes”. Why this lake was named thus remains a mystery, although some suggest its gently curved shape may have inspired such a title. The names of the remaining six lakes, however, can clearly be tied to their unique attributes: The waters of Soya Lake (Shadow Lake) are constantly in the shade of the nearby bluffs. The shores of Hushyor (Vigilance) were known in the past to attract many snakes. Nofin (Umbilical Cord) is a thin, elongated lake and is also the most central of the seven. Khurdak (Baby) is a very small lake that can be circled in just a few minutes. On the far edge of Marguzor (Meadow) are picturesque fields. And the last lake, Hazorchashma (Thousand Springs), is fed by the waters of countless streams trickling down from the surrounding mountains.

Located 40 kilometers from the town of Penjikent, Marguzor Lakes can also be accessed from Samarkand, Uzbekistan (100km, 2.5hrs) or from Dushanbe (260km, 5hrs). While the lakes all lie along a 14- kilometer span, if you plan to stop at each lake (highly recommended) plan to spend a minimum of 3 hours on this drive, and 5-6 hours if you wish to take your time and make the most of the fact that you’ve likely traveled a very long distance to reach this place. 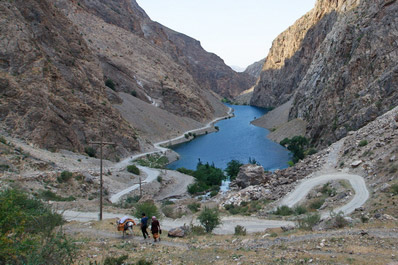 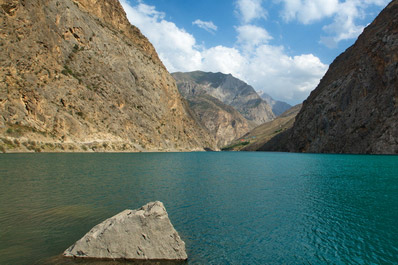 Seven Lakes also makes a great overnight destination, and those wishing to do so have several options. A few guest houses have opened near Nofin, the 4th lake, offering hot meals and a warm, clean room decked out in traditional décor. A village near Hazorchashma, the final lake, offers home stay options with friendly local families and basic but clean accommodations. Camping in one of the many glades near the lakes is also a possibility, provided you bring your own gear or rent equipment in advance. Note that camping is usually possible only from May to September, since in fall and winter the temperatures drop significantly.

If you plan to drive to Seven Lakes, keep in mind that the road runs parallel to the water in some places and is prone to flooding, particularly in the summer months at Nofin and Marguzor Lakes. The road is also quite steep and poorly paved along some stretches, and small cars may become stalled. 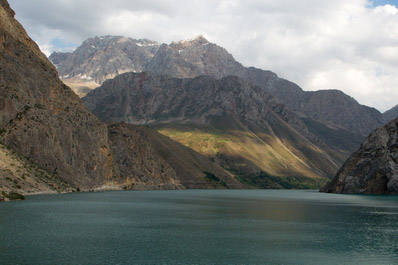 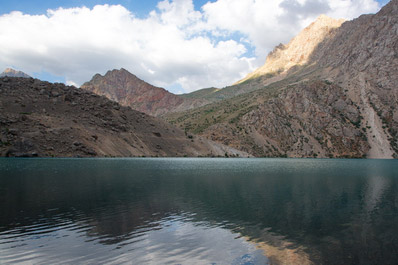 In summer, hiking near Seven Lakes is a great way to explore the area and fully appreciate its beauty. A famous hiking trail to the Tavasang Pass (3307m) begins near Lake Marguzor, and from this path several smaller trails that zigzag into every corner of the Fann Mountains may be accessed. Between the 6th and 7th lakes is a short trail connecting the two, which can be traversed in 30-40 minutes. It’s also possible to drive to the first lake and walk the full length to the seventh lake from this point, but if you choose this route you should also plan to stay overnight.
Seven Lakes in the Fann Mountains are more than a pleasant mountain destination – they’re some of the most exquisite lakes of Tajikistan, steeped in history and legend that provide poignant insights into local culture. Petroglyphs were discovered near Lake Marguzor, and during the Middle Ages semi-precious metals were mined here. Mountain villages perched near Lakes Khurdak and Marguzor provide a glimpse into the present-day lifestyle of rural Tajik families, where mysterious folklore surrounding the lakes remains alive and palpable.

Seven Lakes is a place of wonder and beauty, one of Tajikistan’s most delightful attractions that will not disappoint. Browse the Seven Lakes Tour Page for a list of tours that include a visit to Seven Lakes or contact our travel agents for more information.