Traditional Tajik cuisine has much in common with Persian, Afghan, and Uzbek cuisines. 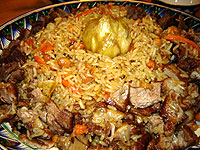 Plov (Tajik: palav, Uzbek: palov), also called throughout central Asia as osh, is the national dish in Tajikistan, as in other countries in the region. Green tea is the national drink. Traditional Tajik meals start with a spread of dried fruit, nuts, halva, and other sweets arrayed on the table in small dishes, and then progress to soup and meat, before finishing with plov. As with most countries in the region, meals are served on a dastarkhan, a low table where food is served at the feet of diners.

Palav or osh, generically known as plov, is a rice dish made with shredded yellow turnip or carrot and pieces of meat, all fried together in vegetable oil or mutton fat (traditionally a sheep's tail) in a special kazan (a wok-shaped cauldron with a narrow bottom) over an open flame. The meat is cubed, the carrots are chopped finely into long strips, and the rice is colored yellow or orange by the frying carrots and the oil together, after which the meat is added, and finally a carefully measured amount of rice and water. Usually, whole bulbs of garlic are added and served atop the plate of plov. Other common ingredients include onions, chickpeas, raisins, quinces, apricots, and other fruits. The dish is eaten communally from a single large plate placed at the center of the table; traditionally, plov is eaten with bare hands, and this practice is still often used in rural areas.

Another traditional dish that is still eaten with hands from a communal plate is qurutob, whose name describes the preparation method: qurut (sometimes called Kurt, dried balls of salty cheese) is dissolved in water (Tajik: ob) and the liquid is poured over strips of а thin flaky flatbread (patyr or fatir, or more accurately fatir ravghani, i.e., fatir made with butter or lard for flakiness). Before serving, the dish is topped with onions fried in oil until golden and other fried vegetables. No meat is added.

Tea accompanies every meal and is frequently offered between meals as a gesture of hospitality to guests and visitors. It is served hot in a china pot with a lid and is drunk with or without sugar or honey, from small saucer-like cups without handles (piala). Because of the universal popularity of tea-drinking, the chaikhana or teahouse is the most common gathering place in Tajikistan, replacing the Western-style coffee house.

Meals are usually served with non, a flatbread found throughout Central Asia (also universally called lepyoshka in Russian). If a Tajik has food but not non, he will say he is out of food. If non is dropped on the ground, people will put it up on a high ledge for beggars or birds. Legend holds that one is not supposed to put non upside down because this will bring bad luck. The same holds true if anything is put on top of the non, unless it is another piece of non.

Many Tajik foods are eaten in other countries of the region as well. One of these is the good old shashlik (shish-ka-bob without vegetables, barbeque) which can be found on any street corner in central Asia. Shashlik is simply chunks of meat (any type) put on a long skewer and roasted over a charcoal or wood fire; the marinade, however, is crucial to the taste and varies widely. Traditional Tajik soups include mainly meat and vegetable soups (such as shurbo and piti) and meat soups with noodles (such as lagmon and ugro). Other dishes shared regionally, either as fast food or as an appetizer, include manti (steamed meat dumplings), samsa (a triangular pasty with a meat and onion stuffing, baked in a tandir oven), and belyash, deep-fried cakes made of yeast dough and filled with minced meat, similar to piroshki). Dairy dishes, usually served as part of the spread of appetizers in a Tajik meal and scooped with pieces of flatbread, include chaka (a sour milk preparation), thick yoghurt, and kaymak (high-fat clotted cream). Qurut balls may be served as a snack or an accompaniment to cold beverages. Although not a traditional Tajik drink, kefir, a drinking yogurt, is often served with breakfast.

In the summer, Tajikistan is abundant in fruit: its grapes and melons were famous throughout the former Soviet Union. The bazaars are overflowing with fresh, natural pomegranates, apricots, plums, peaches, apples, pears, figs, persimmons, quinces, berries and many others.