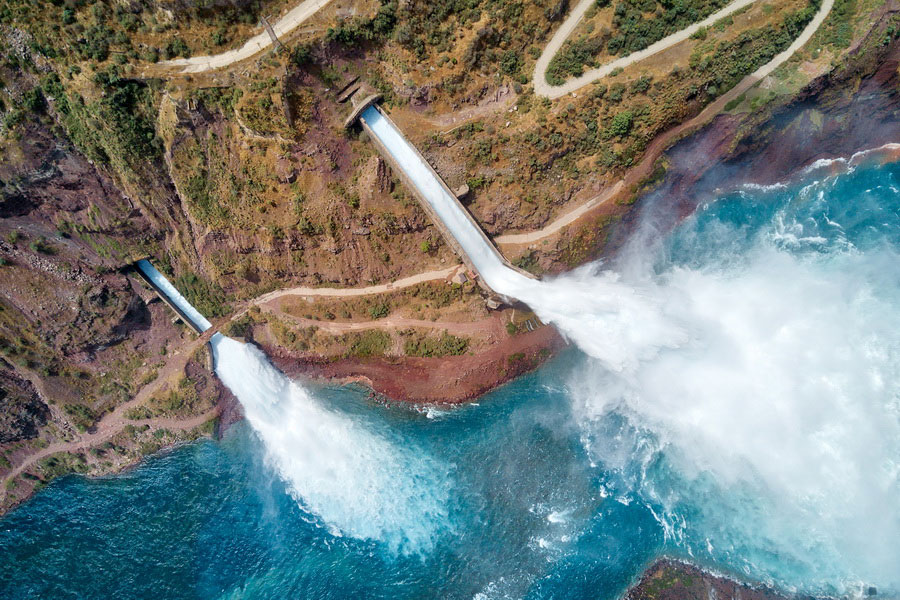 Nurek (also written as Nurak) is a city in the Khatlon province of Tajikistan. It is situated on the Vakhsh River, 885 m above sea level, and is 70 km southeast of Dushanbe, the capital. It has a population of 19,000. The city was founded on the site of the former village of Nurek, whose name means "pomegranate" in Tajik language; the modern city was established in 1960 to support the construction of nearby Nurek Dam, which was completed in 1980. Engineers, construction workers, bureaucrats and their families were housed in orderly apartment blocks. However, in recent years, Nurek has become a popular resort town; many hotels, guesthouses, restaurants and tourist services have appeared. Most guests arrive from Dushanbe and southern Tajikistan, attracted by the stunning mountain views, fresh air, and serene and scenic reservoir. The town is especially beautiful at night, when it is lit up by thousands of lights; sunsets are also other-worldly, due to the unique combination of alpine scenery and the vast, calm reservoir.

Nurek Dam and Reservoir
Nurek Dam and hydroelectric station is an enormous earth-fill dam located in a deep gorge at 38.3715 N, 69.3492 E, on the Vakhsh River in the central Asian nation of Tajikistan. It is about 75 km east of Dushanbe. At 300 m (984 ft), it is the tallest dam in the world as of 2008. (The Rogun Dam, under construction up the river, is expected to be even higher when completed, at 335 m (1,099 ft). Currently, the dam makes up 75% of the country's total electricity production (3.0 of 4.0 Gigawatts), and provides for more than 90% of its power needs. Construction of the dam began in 1961 and was completed in 1980, when Tajikistan was a republic within the Soviet Union. The massive construction effort resembled other similar earth-dam projects in Soviet Central Asia, in that it required the building of a large town near the dam, as well as a decades-long movement of earth and relocation of workers. It is somewhat unique in its construction, however, with a central core of cement as a solid barrier within a 300m (980 ft) - high rock and earth-fill construction. The volume of the mound is 54 million cubic meters. The dam includes nine hydroelectric power units, the first commissioned in 1972 and the last in 1979.

The Nurek Reservoir is the largest in Tajikistan, with a capacity of 10.5 km2. The reservoir is over 70 km (40 mi) in length, and has a surface area of 98 km2(38 sq.mi). The reservoir supplies the hydroelectric plant located within the dam, and stored water is also used for irrigation of local agricultural land. Irrigation water is transported 14 kilometers through the Dangara irrigation tunnel and is used to irrigate about 700 km2 (300 sq.mi) of farmland. The reservoir is very popular with boaters, as its creation opened up vast areas for easy exploration by boat. The middle of the lake is also a great place to simply admire the vast gorges and snow capped peaks on all sides. One drawback is that there are no sandy beaches, due to the fact that this is not a natural lake; the rocky slopes run straight into the water. However, many houseboats are moored in rocky niches throughout the many valleys of the reservoir, from which swimming can.