Kyrgyz culture has been greatly influenced by their nomadic heritage. It is reflected in the way a household was run, in customs and rites. People decorated their homes with items that were both beautiful and practical. The masterpiece of folk creation is the Kyrgyz yurta (yourt, yurt, tent), which was easy to assemble and transport from place to place.

The Yurta is a small dwelling, decorated with hand-made felt carpets and strips. Having its roots in ancient Turkic tribes, the yurta took all the best from many centuries' experience of nomadic people. Kyrgyz tribes, occupied with nomadic cattle-breeding in the mountains, worked out the best type of transportable dwelling that is easily dismantled, moved on pack animals and again set up.

The Yurta consists of wooden pieces and a felt cover.

Latticed folding walls (kerege) consist of separate links. They define the size of the yurta. From the outside, the kerege are covered with mats made of cheegrass stalk. It lets air into the dwelling and at the same time protects it from wind and dust.

The spherical roof of the yurta is made of sharply bent poles - uuk. At one end, where they are bent, they are fixed to the upper part of the wall base, at the other end they are set into the holes in the tunduk - a wooden circle at the top of the yurta.

The Yurta is made of willow; for the tunduk, which constitutes the hole for smoke to leave the yurta, they use more solid kinds of wood (birch, juniper).

The Yurta is covered by felts of different types. These include tunduk jabuu, tuunduk, and uzuktor. The felt cover is connected to its frame by narrow woven and leather strips. The cover of the tunduk is moveable and the hole for smoke is easily opened in the morning and closed at night with help of long cords. The doorway is covered with felt or woven ornamented curtains.

Yurta can be set up in about 1 hour.

The internal and external sides of the yurta are richly decorated with different ornamented items made of felt, application, braided patterned fringe, multicolored tassels (chachyk) and patterned braid (terenchek boo).

Over the years, not only the yurta as a whole, but its interior has changed. The right side of the yurta was considered the women's part (epchi jak). Here, colored bags with felt application, clothing, headdresses, jewelry, needle work of mistresses and pottery were kept. Food storage was separated with a screen from the ornamented mat (chygdak).

The left side was for men (er jak), where the best clothing and headdresses of the men were hung, and closer to the entrance hung a harness.

The place opposite of entrance was considered an honorary position (tor). On this part of the wall was a row of trunks where rarely used patterned carpets were laid. The more carpets - the richer the people living in the yurta. On the floor of the yurta only the best carpets, ala-kiyiz, were laid, and on them - narrow quilts (toshok) or fur rugs - koldolosh. The "Tor" was the center of the yurta. It was the place for the most honored guests. "When you are the guest, don't sit in the tor". If a person more honorary than you shows up, the master will tell you "Give your place to him!". And you will have to give up that spot before all the guests. So when you are guest, take a less honorary place. And the master of the house will come and say: "Respected friend, please, go to tor", then your authority will increase). Before sitting guests was laid a kind of table-cloth - a "dostarkhan". In the middle of the yurta they made the fire and cooked the meals. This spot is called "kolomto". Rich people cooked their dishes in special yurtas - "oshkanas". Poor people lived in small, smoky yurtas (boz ui, kara ui), where they kept not only their utilities (bed, pottery), but during the coldest time of the year - newborn calves and lambs.

In the yurta, people are always surrounded by comfortable carpets, woven and embroidered covers, blankets and pillows and other items often made by the mistress herself. Materials that she uses include felt, fleecy cloth, furs, textiles, and cheegrass; the main decorations are bright colors and ornamentation.

The coloring of Kyrgyz national cloth, carpets, and embroideries is saturated and cheerful. It is composed of strong, contrasting colors, where warm colors (red and light brown) prevail. In the past, masters used natural dyes. Ornamentation has its origin in the Bronze age, but gradually has been was improved and expanded. Its elements were taken from the flora and fauna which surrounded the nomadic peoples. The main motif of Kyrgyz ornamentation was "kochkor" - stylized ram's horns. Sinuous lines with rhythmically placed curls are named "kyal" (dream or fantasy). It is also reminiscent of the branches of a flourishing tree.

Kyrgyz carpets - "kiyiz" and "shyrdak" - are made of warm felt and are always richly decorated. Shyrdak is made with the help of a mosaic technique of application, based on a patchwork of felt pieces with multicolored threads. Ala-kiyiz is made by ramming and rolling multi-colored fur into a friable felt base. It is famous for its cleanness of line and its fuzziness.

Mats and screens, as a rule, are a whole art composition, made by braiding cheegrass stalks with multicolored fur. On homemade machines, women wove from thick threads the braid (boo) for various ornaments. They embroidered with fur and gold thread on leather, felt, chamois and canvas.

Nooruz (New Year)
Nooruz is the Muslim New Year's, and the most widely celebrated holiday in Kyrgyzstan. It has been celebrated on March 21st for more than 2,000 years. A lot of preparation goes into this special day. People buy or make new clothes, and boz ui are erected and decorated with juniper to make them as attractive as possible.

In Bishkek, the colossal festivities culminate in a game of ulak tartysh (see below), and in every city and village in the land, smaller but no less lively celebrations take place. It is a great honor to take part in Nooruz, which is held in Muslim countries all over the world.

Uilonuu toi (Wedding Feast)
Before they get married, the young couple's parents prepare clothes for them. The bride's mother, sisters-in-law and friends put up a white yurt. The groom and his friends come to take the bride away. According to tradition, the bride's mother and sister-in-law sing koshok (a lament over her departure) and say good-bye to each other. Her sisters-in-law accompany the bride to the groom's house, where the wedding party starts.

Beshik toi (Cradle Feast)
This feast celebrates a new child's first day in the cradle, within a week of his or her birth. The beshik is a wooden cradle used to swaddle a child until he or she starts walking. Historically, the Kyrgyz made very simple beshiks, suitable to their nomadic way of life. Two arcs are made from a bunch of dry willow as thick as a forearm; holes are made in their bases. Sticks matching these holes are attached, and wicker rope is strung between the sticks. A mattress is spread out inside.

Jentek toi (Birth Feast)
New parents show their happiness by treating their neighbors, and a mark of respect is to treat people to sary mai (yellow butter). First it is put into the baby's mouth, followed by the oldest person in the house. The sary mai is kept in a slaughtered lamb's, sheep's or calf's stomach for the purpose of this feast. To honor ne baby, guests bring clothes, animals or food. Relatives offer calves, sheep or lambs. They can also present a shyrdak (carpet) or horsecloth.

Comuz - crafted from a single piece of wood, with three strings that are played by plucking. The modern comuz is about 85-90 cm long with strings made of kapron. A special feature of the comuz is the ability to tune the strings in variety of ways to suit the music being played. To play the comuz, the performer holds it in a horizontal position while seated or - more rarely - standing. Numerous playing techniques are possible and mastery of the right (plucking) hand technique especially allows for playing of a variety of difficult and complex compositions. The comuz is a standard member of any Kyrgyz folk music group. According to legend, the first comuz was made by the hunter, Kambar. He himself was a master performer (komuzchi), and Kambarkan became one of the distinctive creative genres of Kyrgyz folk music.

Kyyak (kyl kyyak) - a string and bow instrument 60-70 cm in length. The traditional kyyak is made from the wood of an apricot tree and has two strings of untwisted horse hair. Horse hair is also used for bow. The kyyak is played by a master performer (kyyakchi) in a seated position with the instrument held vertically, while the stretched hair on the bow is drawn gently across the strings. The fingers of the left hand do not press the strings to the fingerboard; they gently touch it, producing colorful, harmonic tones similar to certain techniques used in violin playing. Given two options for tuning, the upper string is melodious while the lower string is resonant. The traditional kyyak is an instrument transposing one octave down. The majority of the traditional compositions for the kyyak are very lyrical and heartfelt, which is completely in accordance with the musical nature of the instrument.

Kyrgyzstan hosts over 80 distinct cultures and nationalities. Unsurprisingly, its diverse multiethnic environment has influenced a variety of national cuisines and beverages particularly from Kyrgyz, Russian, Dungan, Uzbek, and Korean traditions.

Kyrgyz food is heavy on meat, dairy, and bread, and light on spices. This is less true of Dungan and Uighur dishes. Each meal ends with the "omin," a face-washing-like motion, which gives thanks to God.

Besh barmak
For Kyrgyz people, besh barmak isn't just an ordinary meal - it is a ceremony complete with its own traditions and customs. A whole sheep is cut up and boiled in a kazan (iron pot) until the soup from this pot is ready to be drunk and the bones with meat on them are ready to be distributed. The dish (boiled pieces of meat with home-made noodles) is eaten with the fingers (besh barmak means "five fingers" in Kyrgyz). After besh barmak, the best dish to serve the honored guest is plov.

Plov is generally served as an enormous mound of rice with onions and carrots, and pieces of boiled meat on top. Among other main dishes there are also manty (fist-sized steamed dumplings filled with mutton and onions), lagman (a Dungan dish of thick home-made noodles in a relatively spicy sauce, with cabbage, onions, and tomatoes), chuchpara or pelmeni (smaller dumplings filled with onions, mutton and fat, and served in a soup), kuurdak (slices of fried mutton beef, with onions and spices, served on a plate garnisned with herbs), shorpo (soup with potatoes, vegetables, and a big hunk of mutton on the bone).

The guests are also offered the different snacks as kuiruk-boor (a slice of sheep's tail fat and a slice of that sheep's liver, served together with spices or shashlyk - smoked kebabs of mutton (or beef, chicken, liver, or various fishes), served with onions in vinegar.

Among a variety of drinks one should be mentioned separately. Kymyz is the most popular drink on the jailoo, made from fermented mare's milk. Bozo is a thick fermented millet drink, slightly carbonated and drunk mostly in the winter. Jarma: A drink of fermented barley, drunk mostly in summer. 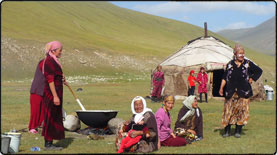 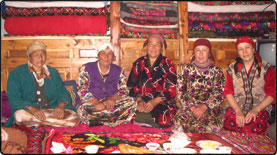 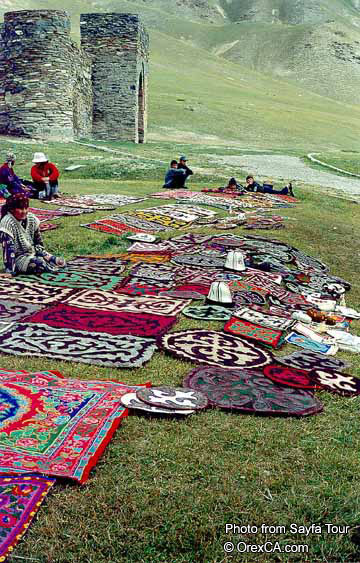 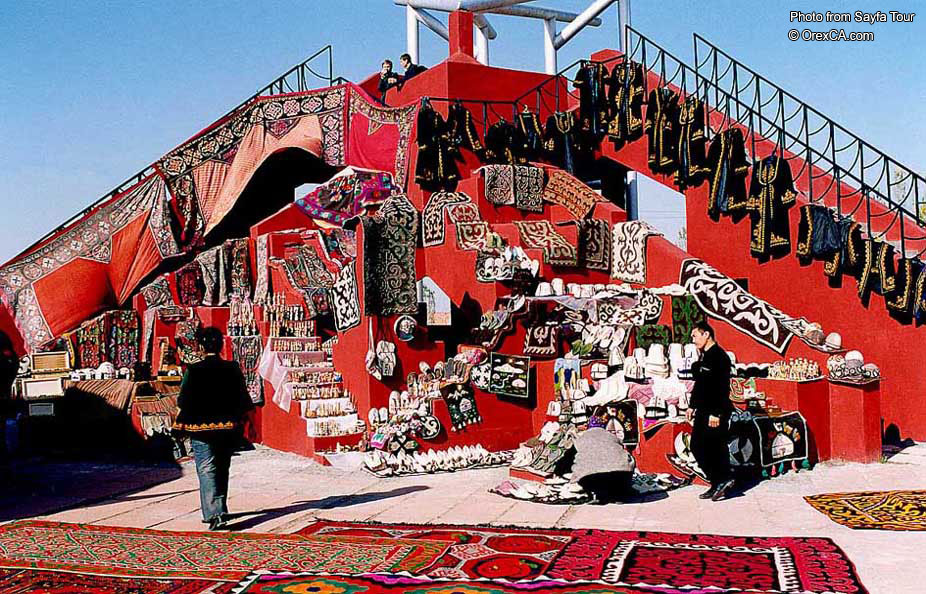 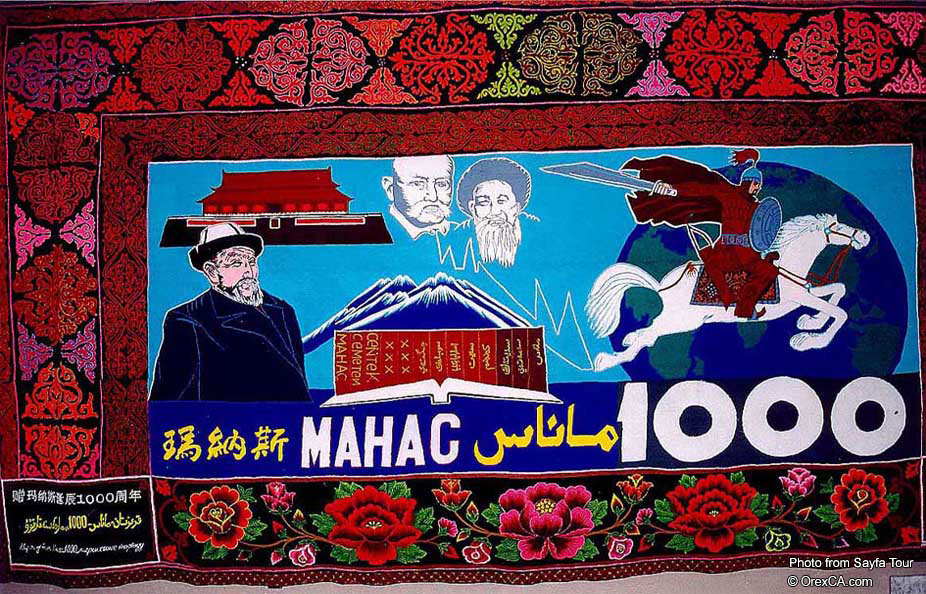 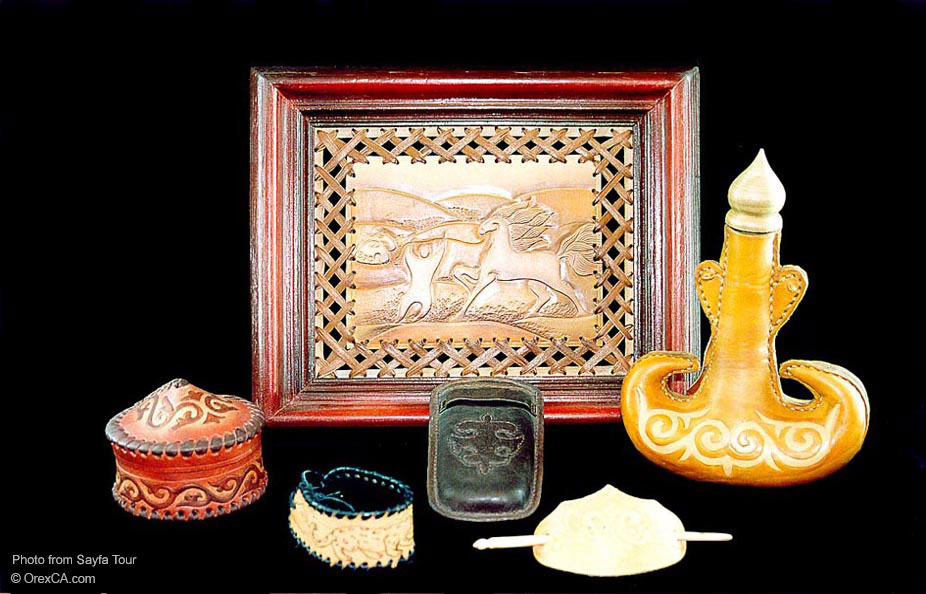 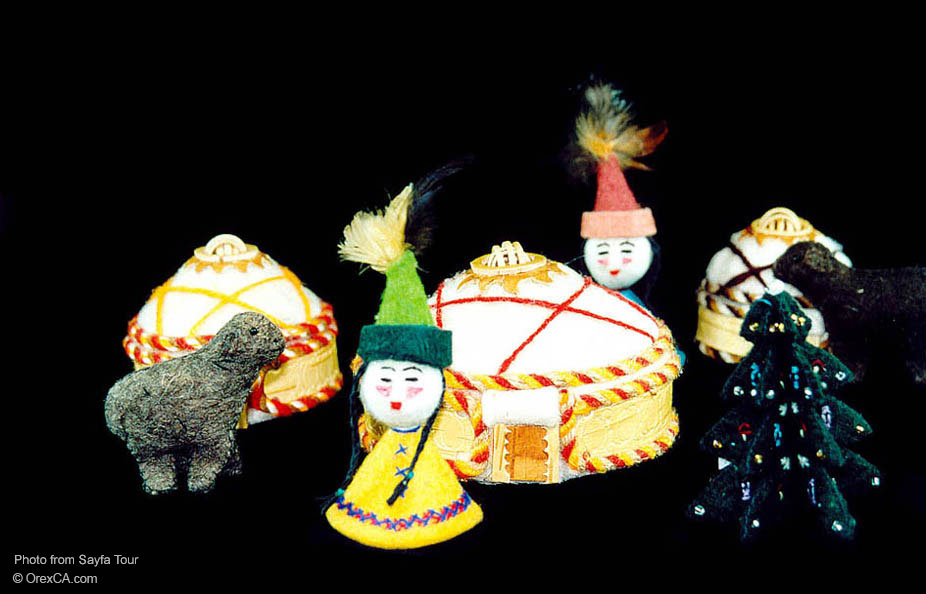 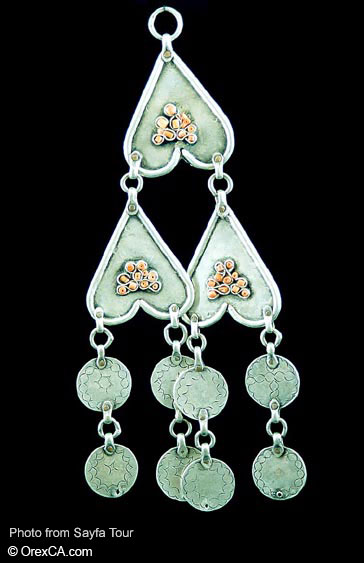 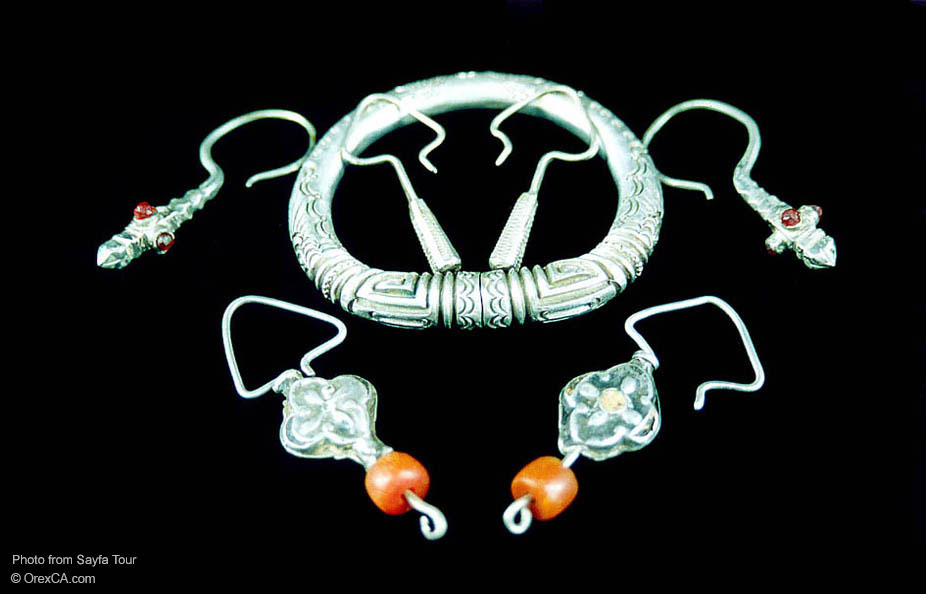