The Darvaza Gas Crater of the Karakum Desert of Turkmenistan is perhaps as close as you can come to standing at the edge of Hell and not dying. Long denoted as “The Gates of Hell”, this fiery attraction is a large pit, at the bottom of which hundreds of flames are continuously blazing, emitting streams of hot air. To stand at the precipice of this flaming abyss and gaze into the orange-red heat, blazing conspicuously in the middle of a vast lifeless desert, creates a sensation like no other.

The Darvaza Gas Crater first materialized in 1971 by complete accident. Geological exploration was being carried out in the Karakum Desert when, near the village of Darvaza, a huge cavity filled with natural gas collapsed unexpectedly. This created a crater 60 meters wide and 20 meters deep. No one was injured, but the surrounding atmosphere was polluted by gases emitting from the crater floor. The geologists set it on fire, assuming that the gas would burn out in a few days. They were mistaken, however, and the flame has not been extinguished for half a century. The Darvaza gas crater is still burning to this day. 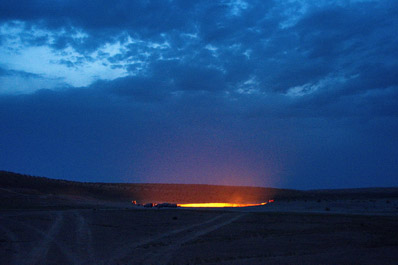 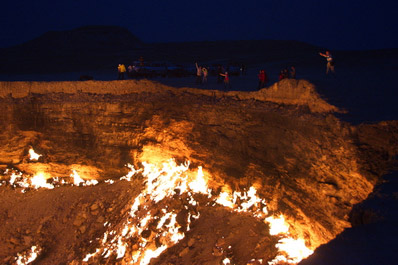 The Darvaza Gas Crater of the Karakum Desert is 270 km north of the capital Ashgabat and 300 km south of Dashoguz. Road conditions near the crater are poor, such that the only way to traverse the final kilometers to the cavern’s site is by 4WD with a driver who knows the territory. As Darvaza is most spectacular after dark, visitors should be prepared to make the return trip at night or, more preferably, to camp out near the flaming pit.

There’s been talk for some time about trying to permanently extinguish the flames – it’s an expenditure of a valuable resource which doesn’t attract many tourists, and for those who do dare to come, entrance is free. Darvaza village was demolished and its inhabitants resettled in 2004; six years later, then-president Saparmurad Niyazov ordered the crater to be filled up, yet the plan was never carried out. 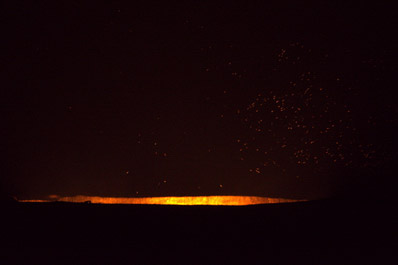 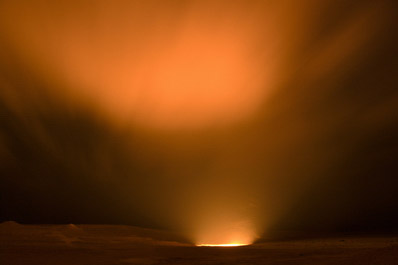 Darvaza is not the only crater in the region. Just 10-20km away sit two more similar pits, inferior in their size and characteristics, but nevertheless worth a visit. The first is a mud crater, with a low, bubbling liquid at the bottom. The second crater is filled with glossy turquoise water, beckoning visitors to swim on hot desert days. But as with the fire crater, it’s nearly impossible to climb out unaided from its steep and slippery slopes, so going for a dive is strongly discouraged!

Today, tours to the gas crater of Darvaza are one of the main attractions of Turkmenistan. While not the easiest locale to reach, it's well worth it. And given that no one knows the precise amount of gas reserves under the crater, or for how many years it will continue to burn, it’s best to pay a visit to this miracle of nature and human error while you still can.