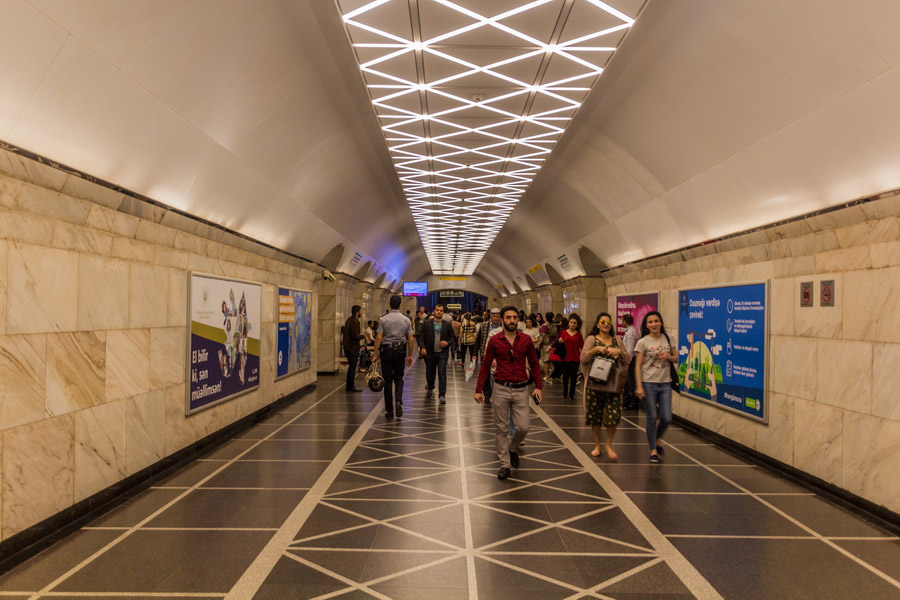 The Baku Metro is a fun cultural experience for anyone visiting the capital of Azerbaijan. Each station has an individual design, from luxurious and pompous to ultra-modern. The stations are named after memorable dates, events and famous Azerbaijanis, providing a mini history lesson as you travel.

The first line of the Baku Metro is 6.2 kilometers in length and was put into operation on November 6, 1967. It had only 5 stations, which today are called "Icheri-Sheher", "Sahil", "28 May", "Ganjlik" and "Nariman Narimanov".

Since then, the subway in Azerbaijan’s capital has grown into an important arm of the Baku transit system, with 25 stations and three separate lines. On the map, the various lines are differentiated with the colors of green, red and purple. New stations are still being built and new branches being laid throughout the Baku metropolitan area. In the future, the subway will cover the entire city: The number of branches is planned to increase to 5, and the number of stations to 76!

The Baku Metro timetable will vary slightly depending on the line and time of day. All routes are serviced by modern, well-equipped trains, although retro trains can still be seen on occasion. In 2017, Azerbaijan celebrated the 40th anniversary of the metro by completing repairs on all of its old train cars.

The Baku Metro is one of the most affordable subways in the world. As of summer 2020, the fare was 30 gapik, or 0.18 USD, with payment controlled via tokens inserted at turnstiles. In 2015, a special "BakıKart" fare card was introduced. Both reusable and disposable cards may be purchased, with a reusable card costing 2 Azerbaijani manat and a single-use card 20 gapik.