Uzbekistan occupies an area of 448 thousand square kilometers, which stretches from east to west for 1400 kilometers. Within this stretch are several large cities that are located in a string and connected by rail. This extensive railway system, with a total length of nearly 7 thousand kilometers, passes through cities such as Tashkent, Samarkand, Bukhara, Khiva, Nukus, Termez, Kokand, Andijan and others.

Uzbekistan Railways is managed by Uzbekistan Temir Yo’llari JSC, which is engaged in freight and passenger transportation and employs more than 90 thousand people. The passenger train fleet is represented by ordinary night trains and the high-speed Afrosiyob, Sharq, and Uzbekistan trains, plus several additional types.

The company is engaged in both the reconstruction of existing routes and the addition of new ones. Uzbekistan Railway’s most important milestones at the beginning of the 21st century were the construction of a tunnel under the Kamchik Pass that connects Tashkent with the Ferghana Valley and the completion of a path through the Kyzylkum Desert, which made it possible to travel from Bukhara to Khiva in just 5 hours. Along with this, reconstruction of obsolete stations is currently underway. 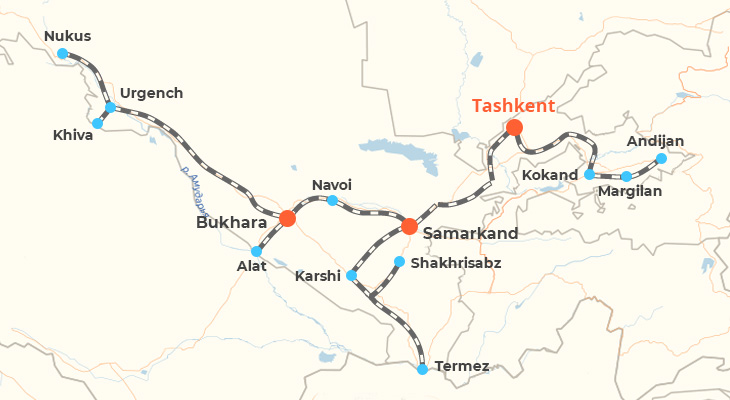