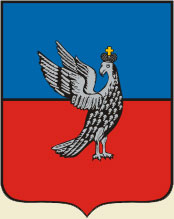 Splendiferous and unique ancient Russian town of Suzdal is a single museum-town of Russia. There are more than 300 monuments of old Russian art on the area of Suzdal which are cultural heritage not only of Russia but also of the world culture because most of them are included into a World Heritage List of UNESCO. In the year 1974 Suzdal has been awarded with order of "Badge of Honor" for conservation of the cultural heritage and tourism development. Suzdal has been the first town having awarded with "Golden Apple" in 1983 by the International Federation of journalists writing about tourism.

Suzdal town stands on the picturesque banks of the Kamenka River, at the influent of the Nerli River 26 km north from the city of Vladimir. Suzdal is rightfully considered as the tourism center of the Golden Ring of Russia and its capital. This amazing city preserving its unique historical image till now can surely make you feel breathe of Ancient Russia.

Герб СуздаляThe historical coat of arms of Suzdal was adopted on August 16, 1781. It can be described as follows: "The falcon in Prince's crown, the field is divided into two parts: blue on the top, red on the bottom". The historical coat of arms has been restored on March 27, 1992. The current coat of arms contains the depiction of falcon as well, there is a golden ring surrounding the falcon which must symbolize the town's belonging to the Golden Ring of Russia.

History of Suzdal
Suzdal is one of the oldest Russian towns which history is very fascinating. The first mention of Suzdal appears in the Annals in 1024. Suzdal has emerged on the place of oldest agricultural, trade and handicraft settlements approximately in the IX century. Archeological sites provided there enable to make a conclusion that those settlements had trade relations with far States of the North and Central Asia. This supposition is testified by ancient coins found on barrows. The foundation of Suzdal as well as of many medieval towns has begun with construction of a fortress - the Kremlin, which was installed in the XI century on the Kamenka River. At the command of Vladimir Monomakh the Uspensky Sobor has been installed at the same place. The first Monastery was set up in honor of Dmitry Solunsky beside the Kremlin of Suzdal. There was a trade and artisanal settlement - a suburb in east of the Kremlin. Believing the history of Suzdal its initial layout remained intact till now.

Suzdal fell to the lot of troubles. In the XI century the city was burnt due to internal war between Oleg Chernigovsk and children of Vladimir Monomakh Izyalsav and Mstislav. In the year of 1107 hordes of Bulgarians ransacked the surroundings of Suzdal.

A lot of shrines have been constructed during the reign of Yuriy Dolgoruky. Suzdal has become the center of religious education and a capital city. At that time Suzdal increased its political significance.

Suzdal lost its leading positions when a son of Yuriy Dolgoruky the prince Andrey took the power. The status of capital is moved to the town of Vladimir. Suzdal becomes a capital of the Principality of Suzdal in the XIII century.

The Tatar-Mongol invasion became a new trouble for Suzdal. In winter 1238 the Tatars occupied Suzdal, burnt it and captured main part of its population. Few citizans of Suzdal could escape to the Rizopolozhensky Monastery which was spared by the overall destruction.

Internal war for the principality of Suzdal began after the Tatar-Mongol invasion. The battle was launched between princes of Moscow, Tver and Suzdal. Suzdal-Nijegorod Principality has been formed by the beginning of the XIV century. The city underwent the growth again. At that time Suzdal was presented by rich and populated town, the principality used to mint its own coin.

The town had been continuously developing, there were a lot of fascinating architectural ensembles used to be constructed there, among them are the Pokrov and Spaso-Efiimiev monasteries and a complex of the Kremlin edifices. Large construction work covered suburbs as well. There were more than thirty parish churches with high bell towers constructed there.

The prince of Moscow has won the battle between the princes. Suzdal became a part of the Great Moscow Principality in the year of 1392. Moscow superseded Suzdal as the seat of the Grand Prince.

In the XV-XVII centuries Suzdal as an ordinary town of the Moscow Principality stood out of the trade ways developed that time and didn't acquire leading position in trade and industrial relations.

The Time of Troubles happened - Suzdal was twice ransacked with Polish troops followed by invasion of Crimean Tatars in 1634. Suzdal has endured devastating fire and epidemics. Getting through those tragedies for Suzdal relative calm marked that period of Suzdal's history. In 2796 Suzdal has been proclaimed a district town of newly founded Province of Vladimir, in 1798 bishop's chair moved from Suzdal to Vladimir.

As the railway built in the middle of the XIX century passed by Suzdal industry of the town had not been properly developed. In return the town of Suzdal still has its historical appearance.

Sightseeing of Suzdal
The unique and ancient Russian town of Suzdal can be considered a reserve-in-a-town. There are no high buildings in Suzdal and one can see old wooden huts while walking along small, quiet and cozy streets of the town.

The central street of the town leads to the main interesting place of Suzdal - the Kremlin. Getting the Kremlin area you will fall into miraculous world with every corner penetrated by antiquity spirit of Rus. There is the Uspenskaya Church located at the place where the Prince's courtyard was situated at old times. The Church was built in 1650 and reconstructed in the year 1720.

There is the church of the Nativity of John the Baptist, Vkhodoerusalim and Pyztnickaya Churches as well as Saint Paraskeva Pyatnitsa's Church nearby the Kremlin itself.

The building of shopping arcade ("Gostiny Dvor") is located in front of the Kremlin on the trade square. This construction was typical for the XIX century and was designed both for trade and ball theme events as well.

There are churches of Saint Lazarus and Saint Antipy on the Ancient Avenue of Suzdal. They captivate with their colorful architectural design. Saint Lazarus Church is the first five-cupola church of suburb type in Suzdal. It was built in 1667. Saint Antipy Church was built in a century. There is a bell tower nearby the churches. This unique architectural construction is interesting with its original cupola designed in the form of concaved pavilion. Cupolas of this feature were first arisen in Suzdal that is why they are called the "dutkas of Suzdal".

The Suzdal Monasteries such as Aleksandrovsky, Pokrovsky and Spaso-Efimev Monasteries are amazing and very interesting historical places of the town.

At the ancient centuries Aleksandrovsky Monastery used to be called the Big Lavra. There is a legend saying that the Monastery was founded by Aleksandr Nevsky in the year of 1240. The Monastery was well-known by Moscow princes Ivan Kalita and his son Ivan.

The Pokrovsky Monastery was founded by the Prince Andrey in 1364. An ancient legend says that the Prince has built the monastery in sign of his gratitude addressed to the heavens for his staying alive during the storm on the Volga River.

There is the Spaso-Efimiev Monastery on the other bank of the Kamenka River. This is one of the largest monasteries of Suzdal. Thick stone walls and numerous battlements are the evidence that the monastery was a fortress in its past. Enemies were shot from the highest Saint's tower of 22 m. The Blagoveshchenskaya Church is disposed over the internal gates of the Monastery, the Spasso-Preobrazhensky cathedral is located in the center of the monastery and the belfry is on the left. Dozens of bells were considered the most soniferous in Suzdal. In 1930 the bells were sent for recasting. At the initiative of the Vladimir-Suzdal museum the bells were gathered all over Vladimir Oblast (Province) by the end of the XX century. Due to this the Saosso-Efimev Monastery could return its previous sounding. Nowadays one may listen to the bells sound.