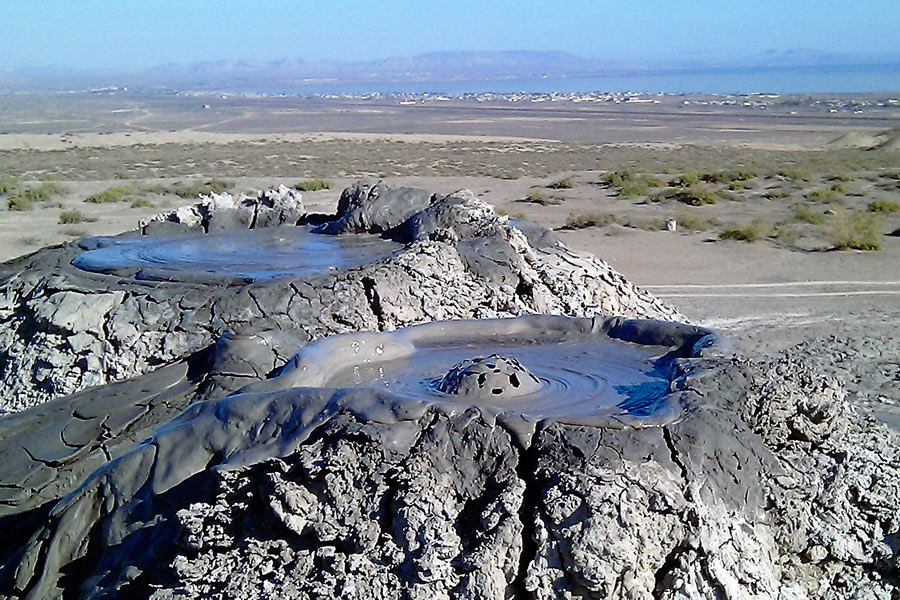 The vicinity of Baku offers an eclectic array of activities for travelers to Azerbaijan. Striking natural phenomena that contributed to the formation of religious cults, rock paintings that pull back the veil of time and delicately preserved structures that hearken from the Silk Road era each provide a unique chance to fully engage with the cultural and natural riches of Azerbaijan.

If you’re wondering what to see near Baku, consider these key sights, all of which can be found in the immediate surroundings of Baku, Azerbaijan:

Gobustan Petroglyphs is an open-air museum of rock drawings located 60 kilometers from Baku in Gobustan National Park. Azerbaijan’s most important archaeological site, its thousands of petroglyphs have significantly expanded our understanding of the tribes which once inhabited the region by providing glimpses into their life and culture, beginning from the Mesolithic era. The petroglyphs are estimated to be 4-6 thousand years old and include linear and schematic images depicting scenes of farming, hunting, harvesting and ritual dances, plus still frames of boats, people, animals, symbols and signs.

Gobustan Petroglyphs are included on the UNESCO Cultural Heritage List. A small museum and Gaval Dash, a naturally ‘musical’ limestone rock, are also located on the premises.

Gobustan Mud Volcanoes are located in the national park bearing the same name. These bizarrely beautiful creations are formed by natural gases bubbling up through the earth in muddy spurts. As the volcanoes are small in size and rarely erupt, they are considered a safe, albeit unusual, tourist destination. In total, Azerbaijan lays claim to more than 350 such formations, making them the possessor of more mud volcanoes than any other nation in the world.

Ateshgah Fire Temple is an ancient Zoroastrian temple. Located 30 kilometers from the center of Baku on the outskirts of the village of Surakhani, it is one of the most unusual manmade attractions in Azerbaijan.

In former times, jets of natural gas would bubble up from the earth and instantly ignite upon contact with oxygen, leading the fire-worshipping Zoroastrians to attach mystical and religious significance to the locale and to erect the original temple. After the adoption of Islam, however, the cult of fire worship was threatened with annihilation. The temple was destroyed and, in an effort to preserve their faith, most local Zoroastrians fled to India.

In the 15th – 17th centuries, Hindus arrived to Absheron Peninsula with trading caravans and began to build a new temple on the site of the original one. During the 18th century, vaults, cells and even a caravanserai were added around the sanctuary. In 1880, the flames suddenly ceased when the movement of tectonic plates completely blocked the underground gas sources. The fire-worshippers took this as a sign of punishment from the gods and subsequently abandoned the place.

Today, Ateshgah Temple is surrounded by a massive wall with battlements carved out of stone. The temple itself is a pentagonal structure with an entrance portal in the center of the courtyard. A guest room is situated above the entrance, at which stands an altar-sanctuary. Additional hearths can be found in each corner, while a guest room sits above the entrance portal.

While the temple has lost its former religious significance, Ateshgah Fire Temple is currently open to the public, although the flames now seen at the site are supplied artificially.

Gala Museum is an interactive open-air gallery located near Baku on an area of 1.2 hectares. A plethora of exhibits unearthed during archaeological excavations reflect the lifestyle of Absheron Peninsula’s earliest inhabitants. Ancient and medieval dwellings on display at the museum were brought in from different parts of the peninsula as a representation of everyday historical life. In addition to dwellings made from animal skins, guests can see houses made of stone, clay and straw, ancient markets and blacksmiths’ shops, bakeries, workshops and other functional buildings dating from early times to the 19th century.

Visitors to the Gala Museum can interact with the ancient culture of Absheron by feeding horses, donkeys and camels, helping to create an earthen vessel on a potter's wheel, joining an ancient carpet-weaving ceremony or baking bread in a traditional oven.

Tuba-Shahi Mosque is located near Baku in the village of Mardakan. Built by order of Tuba Shahi in 1481-1482, it has been perfectly preserved to this day and serves as a prime example of typical 15th- century Azerbaijani architecture.

The walls of the mosque are made of hewn stone with smooth surfaces, while the windows are rectangular and decorated with stone bars. The mosque’s upper facade is decorated with a carved cornice. The main entrance is defined by a characteristic ledge, while above the entrance the date of its construction is carved in stone. Tuba-Shahi Mosque is devoid of architectural extravagance and rich ornamentation, instead reflecting a simple, concise design which corresponds to architectural norms of the medieval era.

The mosque has a prayer hall and several small rooms connected by arched vaults. The central part of the structure is crowned by a small drum topped with a pointed dome. The mihrab (niche that indicates the direction of Mecca) is located on the southern wall. To the right of the mihrab is a raised platform from which the imam preaches a sermon (khutba) every Friday. Despite the mosque’s compact design, it can accommodate a large number of believers for joint prayer.

Absheron Towers are a scattered string of battlements that were formerly united into an integral defensive system around Baku. Originally built to fortify the city from surprise attack, Absheron Towers encompasses Maiden Tower in Baku’s Icheri Sheher, Mardakan Fortress, Ramana Fortress, Sabayil Castle and Shikh Fortress, also known as Ishyg Galasi or Round Tower. Each of the castles may be visited, with the exception of Sabayil Castle, which lies half-submerged in the Caspian Sea.

Tourists to Azerbaijan who visit Baku are encouraged to venture out into the vicinity of Baku to experience all that the countryside has to offer.