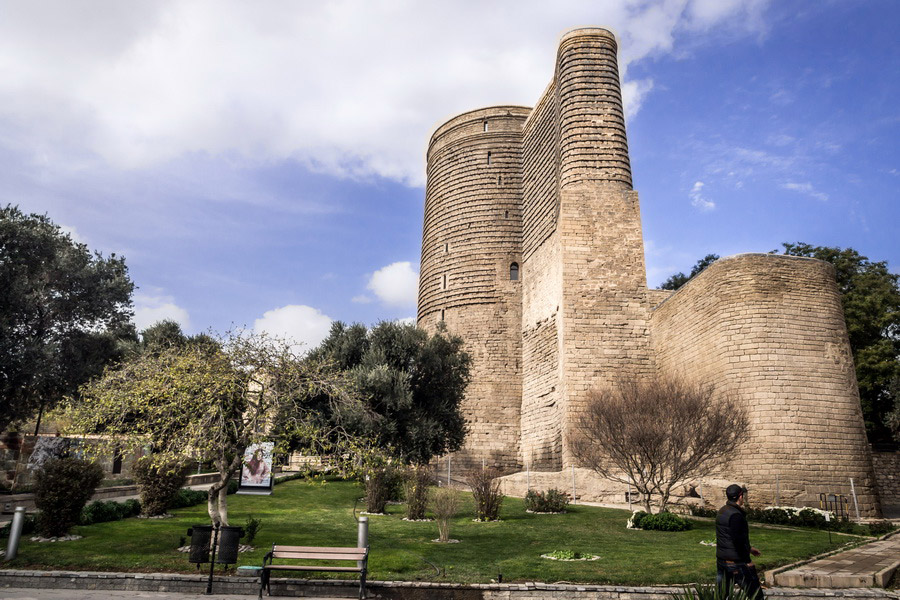 Maiden Tower in Baku is considered a symbol of the capital of Azerbaijan. Known locally as Giz Galasi (Qiz Qalasi), it is located in the heart of the old city known as Icheri Sheher and is truly one-of-a-kind.

The height of the tower reaches 28 meters, and its diameter 16.5 meters. It is built in the form of a cylinder that tapers at the top, while an elongated ledge is attached to the tower’s side. From the inside, the tower is divided into 8 tiers sequentially connected by spiral staircases. To ascend, you must clamber up large stone steps, yet the beautiful view of the surrounding area and the Caspian Sea at the top is a fitting reward for your labors.

The exact age of Maiden Tower is unknown. On one of its walls is a 12th century stone tablet with a text in Arabic, yet the tower was built much earlier, with various estimates placing its construction between the 1st-9th centuries.

There are also disputes over the original purpose of Maiden Tower. Its design, however, rejects the assumption that it once performed a defensive function, and most likely it was used to conduct burial rites of worship. Zoroastrianism was the dominant religion on the territory of pre-Islamic Azerbaijan, and one theory, supported by the shape and location of the windows along the tower’s steep spiral staircase, attributes the construction of Maiden Tower to the cult of sun worship. The windows resemble slits with their elongated, narrow shape, and at dawn on the winter solstice, the sun's rays first enter the central window before creeping seamlessly into each successive opening.

Although no one truly knows precisely when and why Maiden Tower was built, this has not stopped people from surmising, and legends regarding its history abound. One story claims that a powerful ruler decided to give his daughter in marriage to a man she did not love. The girl begged her father to build the tower and postpone the wedding until its completion in the hope that her father would change his mind over time. Yet upon finishing the tower the king remained adamant. In despair, the girl threw herself from the top of the famous Baku tower into the sea, crashing upon the rocks. Many believe that in times past, girls would place flowers on these rocks on the eve of their wedding in remembrance of the freedom-loving maiden whose life tragically ended. In another version of this legend, the heartbroken daughter also had a lover who, upon learning of the death of the princess, killed her father. Yet a third variation of the Maiden Tower story claims that the girl did not die but lived happily ever after with her true love.

Nowadays, thousands of tourists flock to Maiden Tower every year. Highlights of the visit include a museum displaying an array of historical artifacts, the aerial view at the top of the tower and a miniature composition of Old Baku. The tower, less than a 10 minute walk from Baku’s Fountains Square, is often visited in conjunction with other historical sites in Icheri Sheher and with newer attractions along Nizami Street and Baku Boulevard.

No matter how many tales surround the mysterious Maiden Tower in Baku, its historical roots and cultural value for the Azerbaijani people remain undisputed.