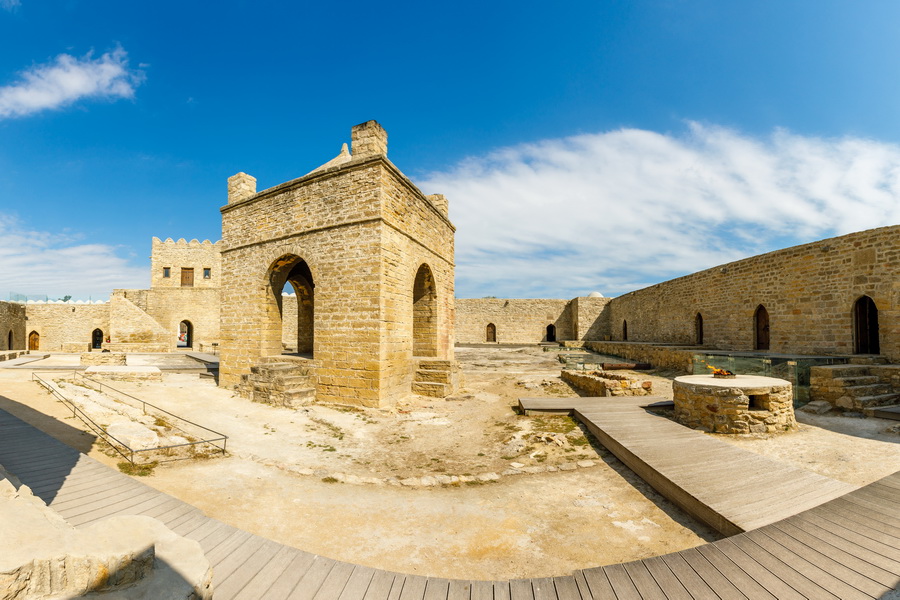 Ateshgah Fire Temple, known locally as Yanar Dag (Burning Mountain) is one of the most unusual places in all of Azerbaijan. An ancient Zoroastrian temple dedicated to fire worship, it is located just 30 kilometers from the center of Baku on the outskirts of Surakhani village on the Absheron Peninsula.

Zoroastrian fire worship has been practiced on the territory of Azerbaijan for at least 2000 years. For centuries at Absheron, jets of natural gas would spurt from the ground and instantly ignite upon coming in contact with oxygen, a phenomenon to which the Zoroastrians attached a mystical significance. In response, a temple of fire dedicated to the worship of these flames was built on the peninsula.

Shortly after the arrival of Islam to the region, the practice of fire worship came under threat of destruction. In an effort to preserve their faith, the Zoroastrians fled to India. In the 15th – 17th centuries, Hindus arriving to Absheron with trading caravans began to build a new house of worship on the site of the long- destroyed original temple. In the 18th century, oratories, cells and a caravanserai were added around the sanctuary.

Ateshgah Temple is surrounded by a massive wall with battlements carved from stone. A pentagonal structure, its entrance portal is accessed from the center of a courtyard, in which stands an altar-sanctuary and several subordinate altars in each corner. Above the entrance portal is a guest room, or balakhane.

In 1880, the natural flow of gas and flames suddenly ceased. Due to the movement of tectonic plates, the gas sources had become completely blocked and the flames extinguished. The fire worshippers interpreted this as punishment from the gods and subsequently abandoned the area. With their departure, the temple lost its religious significance.

Currently, Ateshgah Fire Temple in Azerbaijan is open to the public, although the current flames seen by visitors are artificially manufactured. Nevertheless, you do not want to miss the opportunity to visit this unusual ancient sanctuary during your Azerbaijan travels!