Lake Issyk-Kul, which means "the hot lake" in the Turkic languages of Central Asia, holds the title as one of the largest alpine lakes in the world. At an altitude of 1,609 meters above sea level it is exceeded only by Lake Titicaca in Bolivia as highest of the large mountain lakes. Two mountain chains of the Central Tien Shan Range border the lake - in the north the Kungei-Alatau (in Turkic: "facing the sun"), and in the south the Terskei-Alatau (in Turkic: "turned away from the sun"). About one hundred large and small rivers flow down into the lake from these peaks, carving gorges and canyons into the mountain flanks. The largest of these rivers, the Tyup and the Jergalan, empty into the lake in the east. In the south, the largest rivers are the Karakol, Kyzyl-Suu, Juuka, Barskoon and Ton; in the north, there are two rivers called Aksu and three rivers called Koisu (Chon "Big" Koisu, Orto "Middle" Koisu and Kichi "Small" Koisu). There are no outlets for the waters of Lake Issyk-Kul, so the lake has a high salinity, actually tasting salty to bathers. 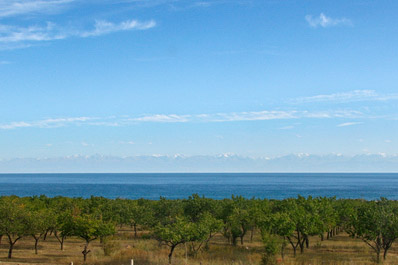 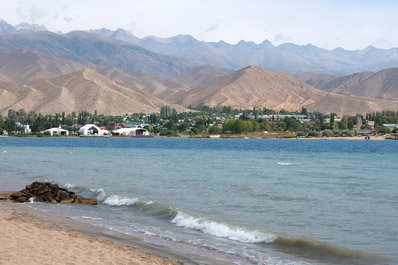 The climate of the Issyk-Kul valley is moderately continental, due to the presence of the huge water reservoir. Summers are relatively cool, as compared to the neighboring Chu valley, and winters are mild with less snow. The surprising transparency and cleanliness of the lake's water, which near the coast warms up to 26°C in August, make Issyk-Kul a popular vacation spot, not only for the inhabitants of Kyrgyzstan, but also for visitors from Uzbekistan, Kazakhstan and Siberia. This inland Kyrgyz "sea" is often referred to as the pearl of the Tien Shan. From a satellite "bird's-eye" view, the lake appears as a huge dark blue eye rimmed with sharp snowcapped peaks - the gaze of the gray-haired Tien Shan eternally looking up into space. Surprisingly rich clusters of stars crowd the night sky, while the track of the sun across the heavens paints unique sunrises and sunsets on the canvas of the lake's surface, transmuting lead into molten gold with sapphire and diamond sparks. 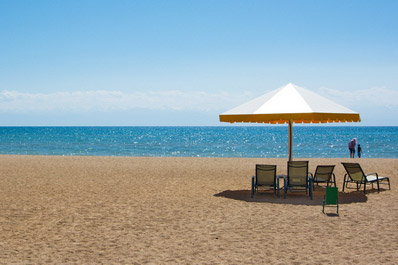 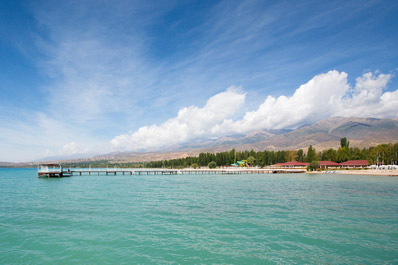 Since ancient times the coasts of Lake Issyk-Kul have attracted people. Everything around the lake is permeated with history: the caves of Stone Age people, the stone burial mounds of cattle breeding tribes, the art galleries of petroglyphs stretching for hundreds of kilometers around the lake, the stone roads and huge burial mounds of the Scythian kings, silent stone statues guarding the repose of perished civilizations. The ruins of ancient and medieval cities which prospered in the times of the Great Silk Road now lie buried underwater, vanished from memory without a trace after centuries of war and conquest. Numberless caravans of heavily-laden camels, horses, and donkeys that once plodded their way from China across the high mountain passes and along the lake shore to distant Europe, no longer ply these routes. The few written sources that survived speak of this golden age of culture, literature and art. The remnants of ceramic utensils thrown up onto the shore by the restless waves of Issyk-Kul remind us of these cities, swallowed up by the stormy waters of life. 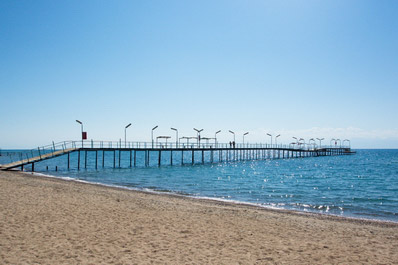 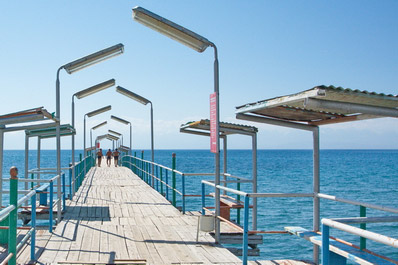 The most ancient mention of Lake Issyk-Kul can be found in Chinese chronicles. Chang Ch'ien, a Chinese explorer, set forth on a journey to the West in the year 138 B.C. He was captured by the Hsiung-nu (possibly the same people known by European historians as the Huns). During his captivity, he visited Central Asia and the mysterious tribes of the nomadic Yueh-chih, who at that time inhabited the lands around Lake Issyk-Kul. The traveler wrote that the land was rich in pastures and coniferous forests. In 629 A.D., Hsuan-zhang, a Chinese Buddhist monk on a pilgrimage to India, reached Lake Issyk-Kul after an arduous crossing of the Tien Shan mountains. The Chinese called the lake Zhehai "the warm lake", as the lake never freezes, which completely corresponds with the Turkic name. "The color of the water is greenish-black," wrote Hsuan-zhang, "its taste is salty and bitter at the same time. Wide waves either run in huge billows, or rise up and rush forward with uncontrollable force. In the lake dragons and fish dwell together, and unusual monsters sometimes appear from its depths. This is why travelers pray for their safe passage.