Ajina-Teppe was discovered in 1959. During the archaeological investigations the archaeologists noticed a small, strangely structured mound. The first trial excavations (two digs) took place in 1960. From 1961 Ajina-Teppe became the main focus of the studies of the South Tajik archaeological department (supervisor B. A. Litvinsky). It is important to note that the monastery was situated in an inhabited area, and in particular that it was not far from the Kafir irrigation channel. Archaeological work in Ajina-Teppe was finished in 1966. As a result of these projects, about two thirds of the area was excavated. This allows us to imagine not only the overall plan of the complex, but also to ascertain the purpose and the dates of the structures, and so to make inferences about their history. In different parts of the complex the remains of paintings and sculpture were discovered.

Excavations were made by a large group of collaborators from the Archaeological and Numismatic Department of the Institute of History, Archaeology and Ethnography of the Academy of Sciences of Tajikistan (supervisor B. A. Litvinsky, his deputy T. Zeymal, and the archaeologists T. Atahanov, A. Babaev, A. Yusupov, W. Solowjew, among others).

Many of the sculptures and paintings discovered were restored by the state Hermitage restorers (supervisors P. I. Kostrov and M. P. Vinokurova). The restoration group included N. Rostovzev, V. Sokolovsky, G. Ter-Oganyan, R. Tzipina, and restorers of the Institute of History, Archaeology and Ethnography of the Academy of Sciences of the Republic of Tajikistan (L. Novikova and M. Stradomskaja). Initial conservation was done on site. More time-consuming and difficult restoration work on Ajina-Teppe's sculptures and murals was done in the Hermitage workshops under the guidance of P. Kostrov, who designed the restoration methodology both for field and laboratorial conditions. During this time, Central Asia was host to various different religions as well as various local and global cults. Buddhism was widely practiced in Tokharistan, Northern Khorasan and Semiretche. Zoroastrism was practiced across Central Asia. Christianity was represented by sects deemed heretical and exiled, such as the Nestorians and Jacobites. Mazdeism and Manicheism were also to be found in several regions. In addition, some of the subjects and images of Penjakent's wall paintings give us reason to believe that a variety of Indian Brahmanism combined with different local cults had reached this area. In Arabic, Chinese and Persian historians' writings from the Middle Ages, we regularly find mention of fire temples, idol temples and ancestor worship. Religious buildings can be divided into three main groups excavated in Central Asia: 1. Buddhist monasteries and temples. 2. Christian churches. 3. Temples of fire, ancestors, idols and so on. In the pre-lslamic architecture of Central Asia the monuments belonging to the third group predominated, with Buddhist temples and monasteries in second place. Ajina-Teppe is one of the most famous Buddhist monuments.

The building was divided into two parts, each of which had different functions: the monastery (vihara) and the temple/ sanctuary (singaharama). The monastic wing occupied the southeastern part of the building. It is based on a four-ayvan-courtyard, on a 19x19m square. There is an arched ayvan (a deep portico with the open side facing toward the courtyard) in the middle of each side of this square. Leading from the back wall of the ayvan were passageways connecting them with square chapel chambers. These paired spaces form the axis of symmetry on each side of the square (see plan; areas 2, 11, 19). The arched openings led to L-shaped corridors (see plan; areas 3/5, 26/27, 4). The spaces situated behind the ayvans are irregular in their size and positioning. The figured pedestals with two-step staircases were built inside along the walls. There was a rectangular pedestal in the center of the room. Near the lateral walls of the room, between the pedestals and pillars of the entrance, narrow and low sofas were situated. The lower parts of the walls, surface of the sofas and postments were decorated with paintings (including narrative paintings). The front walls of the lateral pedestals were decorated with reliefs (these were the lower folds of the garments of large figures').

The Temple section (sangharama) occupies the northwestern part of the building. Its square court yard is much more spacious and monastic (30x30). In the center of the courtyard was a stupa, two meters high (the top part has been destroyed) where there should be a dome-shaped ledge with a chamber inside for the storage of sacred relics. From four sides it was reached by ladder. As well as in the monastic half, the court yard was surrounded by four vaulted ayvan. The southeast ayvan connected the temple half to a monastery through a corridor-shaped lobby. Behind the other three ayvans, small square-dome chamber-chapels with supha forms for statues in each one are located. 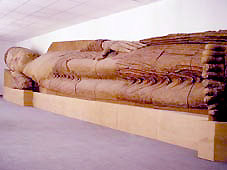 In an angular northeast corridor (#23) on a high pedestal, the sculpture of a reclining figure " the Buddha in nirvana " (the highest religious ecstasy to which the Buddhist aspires) in the traditional pose of a sleeping lion has been found. The figure is made from clay (length 12,85 m).

The temple part of the monastery was decorated with a set of painted clay sculptures - images of characters from the many-sided Buddhist pantheon. At the excavation site a head of the Buddha (1/3 natural size), heads of bodhisattvas, heads with black and blue hair, and heads of various deities and monks were discovered. There were many sculptures: the body of the warrior Mar, representations of noblemen, supplicants, demonic creatures and monsters. Among them there are many original and unique masterpieces of Central Asian Buddhist art. At the same time, we see representations of the traditions of the Gandhara (1 B.C. - 3 A.D.) and Gupts cultures (5-8 A.D.).

As for the paintings discovered, only fragments were saved and it is not always possible to reconstruct the scenes depicted. We can see that the walls of the halls were entirely covered with murals. Of the motifs uncovered the most colorful were scenes of Buddha's predication (corridor 22, temple 23, the painting of the courtyard with stupa). The other dominant subject is the scene of presenting gifts on the wall of the passage to temple 31. The painting upon the arches consisted of thousands of small paintings of sitting Buddhas. There are also fragments which portray elements of secular life. The paintings were decorated with ornamental motifs (flowers, lotuses, animals, birds, etc.). 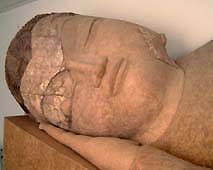 The sacred Buddhist ceremony which took place in the monastery of Ajina-Teppa is thoroughly described by B. A. Litvinsky:

The solemn procession of Buddhist pilgrims congregated on the courtyard of the temple section,"... where rose the dominating mass of the stupas. From four sides, double staircases with railings climbed steeply up to the foot of the hemisphere. Looking higher, one would have seen seven umbrellas the upper side of the stupas. The monks and the faithful would have circumambulated the stupas and made various offerings around it. The stupa was the most sacred part of the monastery, a fact which occasioned a different decorative scheme from the rest. After the ceremony of the pradakshina, the procession made a tour around the enclosure's buildings... The buildings were barely lighted: the narrow beams of light, passing through small openings revealed the upper part of L-shaped corridors and its walls, drowned in the dusk. Groups praying bore adornments, many of them, and the flickering flame created freakish illumination, snatching out from the depth a detail of records which from top to bottom covered the walls of the corridors. There were large medallions with the image of Buddha, surrounded by other, smaller images. And on the wall opposite the courtyard, before us passed the history of the spiritual life of the Buddha, but not in the form of consecutive pictures and in a chain of separate columns are sculptural images of sitting Buddhas in niches". (Litvinskij B. A., Zeymal. T. I., 1971 - page 134).

What place does Ajina-Teppe monastery hold in the history of Buddhism in Central Asia?

The general principle of the lay-out of the structure is defined by a square courtyard (double due to the two parts of the uniform building). The courtyard was surrounded by cells, a monastic hostel and the chamber-chapel. The scheme of the Buddhist monastery "viharva" was visible in the caves and buildings of Central Asia during the 3rd- 1stcenturies B.C., and already in the center of the courtyards were often placed stupa. This principle of the organization of internal space was often followed during the construction of early-medieval monasteries in northern Afghanistan in the Bagh-Gai and Sang-Hao in Kunduz. Despite the common features of Ajina-Teppe and these sacred complexes, it is nonetheless uniquely dominant in both its size and the harmonious arrangement of its parts, the strict and clearly rational planning and the architectural development of some new styles and forms.

The monastery, which was built in the 7thcentury, functioned until the 8thcentury. Its final abandonment and destruction has been related to the consequences of the Arab invasion. During the excavation of the monastery, Arab dirhams were found (which I. A. Davidovic dated to 741/2, 751/2 and 779/780). The monastery functioned for around 1000 years.

The Buddha's restoration: a 40 year-long history

After its excavation and conservation in the field, the sculpture of 'Buddha in Nirvana' which was divided into 44 parts, was transferred to Dushanbe to the Academy of Science of the Republic of Tajikistan's laboratory of Restoration and Ethnography (laboratory supervisor L. Novikova). The restoration of the sculpture has been a long and difficult process.

In the mid 90s the State Hermitage joined the restoration (V. Fominikh began the work). In 2000, after the completion of the State Museum of Antiquities' construction, appeared an opportunity to assemble and set up the sculpture of "Buddha in Nirvana". Under V. Fominikh's supervision, restorers and Museum staff began to erect the sculpture. In the project of assembling the sculpture and completing the restoration, the Institute of History, Archaeology and Ethnography of AS of RT (director R. Massov) cooperated with the French Archaeology Mission in Tajikistan (director R. Besenval, CNRS Guimet Museum) and the NGO ACTED (director F. Roussel). The restoration of the Buddha was completed for the opening of the State Museum of Antiquities of the Republic of Tajikistan in September 2001 during the course of the Tajik Republic's celebrations for its 10th anniversary of independence.