The First President of the Republic of Kazakhstan

1967 - graduated from the technical institution of higher education attached to the Karaganda metallurgical industrial complex. 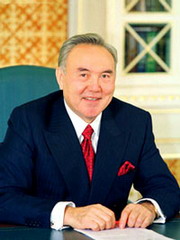 1989 - 1991 - first secretary of the Central Committee of the Communist Party of Kazakhstan. At the same time, from February till April, 1990 - chairman of the High Council of Kazakhstan.

1 December 1991 first nation-wide elections of the President of the republic took place, where N. A. Nazarbayev was supported by 98.7% of voters.

The 29th of April, 1995 - the Presidents powers were extended till 2000 in a nation-wide referendum.

The 10th of January, 1999 on the alternative basis was re-elected as President of Kazakhstan, supported by 79.78% of voters.

Chairman of the Assembly of the Peoples of Kazakhstan.

Supreme Commander in Chief of the Military Forces of Kazakhstan.

Chairman of the World Association of Kazakhs.

The spouse of the President is Nazarbayeva Sara Alpisovna. The head of the International child's charitable fund "Bobek".

The President has three daughters: Dariga - Majilis deputy of the Parliament of Kazakhstan, Doctor of political sciences; Dinara - head of the Education fund named after N. A. Nazarbayev; Aliya - businesswoman, head of the "Elitstroi" construction company. 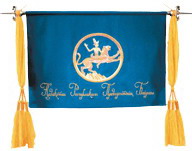 The flag of the President of the Republic of Kazakhstan is a light blue rectangular field with the proportions 2:3. The middle of the field is charged with a golden circle in which is inscribed the image of a young tribal leader of the Saks era (first century B.C.). His right hand is raised; he is sitting on a winged snow leopard. The hand of the man wears a bracelet, the neck has a necklace, and the head is wearing a pointed hat. The image of the man and of the leopard is in gold. Under the leopard are some mountains with snow.

On the bottom of the flag the words "Flag of the President of the Republic of Kazakhstan" are written in Kazakh in golden letters.

The flag has a gold fringe on three of its sides. The hoist has a bronze peak of the "kochkar mouilliz" type to which is attached a decorative tassel. The hoist is decorated with silver nails bearing the engraved names, surnames and patronymic names of the Presidents of the Republic of Kazakhstan in the official language and the dates of taking office and resigning.

This flag is flown in the President's office in Nur-Sultan and his residence in Akorda, and all other presidential residences and means of transport. It is used at all ceremonies with the Head of State.